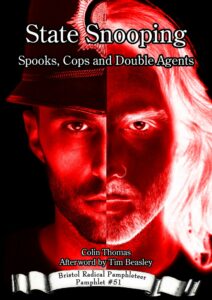 Elizabeth I claimed that she had “no desire to open windows into men’s souls” while seeking to do just that. This pamphlet traces the way British governments have been snooping into the lives of its citizens ever since, culminating in the recent insidious Spy Cops Bill.

State Snooping: Spooks, Cops and Double Agents, is the 51st in our series of BRHG pamphlets. It’s the latest by one of our regular authors Colin Thomas. You can buy the pamphlet here for £3.00 inc p&p.

State Snooping provides a snapshot of the development of state sponsored spying over the last 463 years. It starts in 1558 when the British Royalty and Lords anti-Catholic paranoia and the fear of ‘Rome’s spies’ was at its height, and they feared being overthrown. At this point it was essentially a very dirty war between different branches of the ruling class, with the monarchy at its head. State snooping then evolved in the late eighteenth century as the oligarchy of the landed gentry and their commercial interests begin to be challenged, first by the ideas of English radicals like Thomas Paine in the USA, and then by the French Revolution. Radical thinkers began to demand, and encourage others to take, rights and freedoms, and mass movements began to suppress monarchies and ruling elites in the name of democracy across Europe and the world. It only got worse for those who stood against this tide. Gradual industrialisation gave birth to mass working class organisations, challenging both the state’s monopoly of power and the ruling elite’s control of all wealth. In Britain radical movements such as the Luddites and Chartists were targeted by state spies, and by the mid-nineteenth century there were uniformed coppers everywhere to keep the masses in line.

State snooping rapidly became a formalised and professional activity, with the Metropolitan Police establishing the Special Branch in 1883, and then in 1909 the Secret Service Bureau – which evolved during WW1 into the Directorate of Military Intelligence – Sections 5 (MI5) and 6 (MI6). Between the wars, spying and harassment of workers organisations escalated, with the Communist Party a prime target, and the Labour Party by association. Naturally, Fascists were given a much easier time.

The post-WW2 reappearance of radicalism in the 1960s heralded another shift up in the state’s snooping operations, as they feared losing control of both minds and the streets. The formation of the Special Demonstration Squad (SDS), or ‘Hairies’, by the Special Branch in 1968 marked a dramatic shift. Spycops went undercover, living as radicals, in order to infiltrate groups. The adoption of the identities of dead children, and coercive sexual liaisons soon followed, along with the renewal of spycops acting as agent provocateurs.

State snooping budgets and staffing grew, with additional spycop outfits such as the National Public Order Intelligence Unit (NPOIU) set up, as a never ending list of targets multiplied. Whether striking seamen and miners or anti-nuke protesters, feminists or black workers and youth opposing structural and police racism, journalists and BBC workers, Irish republicans or animal rights campaigners, any dissenting voice and group was fair game to the spycops. Be the Government Labour or Tory – and Labour’s passing of the Terrorism Act 2000 was evidence of their total complicity – the snooping escalated, and advances in technology provided ever more opportunities for secret surveillance. The pamphlet traces all these developments, with multiple references and footnotes.

Then suddenly in 2010 it all imploded, as first the eco-warrior spycop Mark Kennedy was exposed, and many more followed as people’s long held suspicions were given credibility. But for activists and campaigners there was a fundamental problem – except in very rare cases, nobody knew the spycops real names and identities, so who knew which person was a spycop?

Court cases followed as some very brave campaigners, mainly women coerced into relationships, went public and sued the Metropolitan Police. Activist researchers began to piece together the known facts along with other evidence and suspicions. As the evidence grew of the extent of the snooping – believed now to have covered more than 1000 different campaign organisations – pressure from campaigners and a few honest journalists and politicians forced the May government in 2014 to announce a public Undercover Policing Inquiry (UCPI), in an attempt to shut people up (although it will only consider state snooping up 2011, a decade on it still continues). In November 2020, after years of delays and disruption by the police and other state agencies, that Inquiry finally started to hear evidence from witnesses – behind closed doors, with no public video stream, and a time delay on the transmission of verbal evidence. Almost every single request for anonymity, and much more, by the state and police, was granted. A farce ensued, and will continue in April 2021.

But then to really twist the knife, and in a display of total contempt for their own Public Inquiry, in autumn 2020 the Tory government introduced it’s Covert Human Intelligence Sources (Criminal Conduct) Bill, aka SpyCops Bill, into Parliament. This is now in it’s final stages before becoming Law, it has not been opposed by Labour, although some individual Labour politicians, along with many civil liberties and labour movement bodies, have spoken out.

As the Police Spies Out Of Lives Campaign have so angrily, and chillingly, noted:

The government’s new Bill will enshrine in law the very wrongdoing and criminality we have been fighting to legislate against…If this bill is passed unamended, state operatives will become officially above the law. The abuses they have perpetrated against women like us will continue to be sanctioned and authorised. A society that allows for authorised murder, sexual violence and torture is one that is brutalised and desensitised to violence. This bill fundamentally undermines human rights and must be challenged.

For those of us who care about rights, freedoms, and a more just and fairer world however, the SpyCops Bill is sadly just the thin end of the wedge as we move into 2021. Also currently passing through Parliament is the Overseas Operations Bill, which has been roundly condemned by the likes of Amnesty. Meanwhile NetPol has pointed out that:

The Conservative government is planning to introduce major changes to public order legislation to crack down on protests, under a new “Protection of the Police and Public Bill” planned for 2021.” All those, combined with the increased levels of surveillance that have come into being as a by-product of the coronavirus pandemic, paint a pretty bleak future.

And as Colin Thomas notes at the end of State Snooping:

We urgently need to withdraw agreement to the alarming expansion of state snooping and demonstrate that effective resistance is possible. 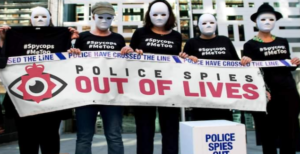