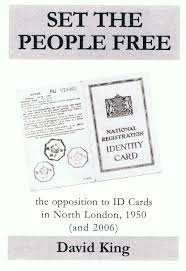 David King will outline how during the Second World War the government introduced compulsory ID cards as part of their emergency measures. It was not until seven years after the War that ID cards were finally withdrawn. Clarence Willcock was instrumental in this process; his refusal to show his ID card when stopped by the police in North London in 1950 raised questions about their use in peacetime Britain and contributed to the withdrawal of the cards in 1952.

David King’s talk will be followed by a facilitated discussion looking at how various equivalents to ID cards have crept into society, even if specific attempts to introduce a national ID card scheme have not been successful. There have been some specific campaigns such as Defy ID and No 2 ID that have rebuffed a national ID scheme. However it has become normal life for many people to carry a form of ID to access venues and facilities, along with the extensive identity checks relating to many aspects of life. For example, Driving Licenses, student ID cards, age related ID card (to prove your age to gain entry), the NI No. card, various membership card schemes and so on.