Vasquez: All right, we got seven canisters of CN-20. I say we roll them in there and nerve gas the corpse just to make sure.

Hicks: That’s worth a try, but we don’t know if it’s gonna affect her.

Ripley: I say we fire the corpse into low earth orbit and nuke it. It’s the only way to be sure.

Burke: Hold on a second. Thatcher’s history has a substantial dollar value attached to it.

Ripley: They can bill me.

Burke: Okay. This is an emotional moment for all of us. I know that. But let’s not make snap judgments, please. This is clearly an important political leader we’re dealing with, and I don’t think you or I or anybody has the right to arbitrarily rubbish them.

Hudson: Maybe you haven’t been keeping up with history; but we got our asses kicked in the 80s, pal!

Burke: Look, I’m not blind to what’s going on; but I cannot authorize that kind of action. I’m sorry.

Ripley: This operation is under military jurisdiction, and Hicks is next in chain of command. Am I right, Corporal?

Burke: Yeah… look, Ripley, this is a multi-million dollar media opportunity. He can’t make that kind of decision. He’s just a grunt! Uh, no offense.

Hicks: None taken. Ferro, do you copy?

Ferro: Roger. We’re on our way.

Hicks: All right. We shoot her off and nuke the corpse in orbit. (Glances at Ripley in agreement) It’s the only way to be sure.

So she has gone (finally).

And what a reaction; from street parties in London, Glasgow, Bristol and elsewhere, fireworks, viral jokes and ‘shocking’ e-posters. A minutes silence is mooted then avoided at the Manchester derby game the same night because it would be counter-productive if thousands were jeering. Spice Girl Geri Halliwell is forced to apologise and take down her ‘girl power’ twitter post about Thatcher after thousands of her fans complain. ‘Ding Dong, The Witch is Dead’ shoots up the singles charts and heads for No. 1. One Daily Mail commentator said:

‘Never in modern times, and probably not in the entire history of these islands, has the demise of a public figure been greeted with such euphoria and wild expressions of hate. The death of Margaret thatcher has revealed something very unpleasant, and rather unexpected about our country’

Bit over the top; of course the Mail are not much good on reality or history, but it shows their outrage. Even Thatcher knew there would be trouble when she expired, as Lord Bell recalled:

‘she absolutely made it clear to me that she thought it would be wholly inappropriate for her body to lie in state. She did not like the idea and she had no doubt there would be some terrible demonstration. She was determined that should not happen’

Liverpool fans were well ahead of the game chanting on mass ‘We’re going to have a party, when Maggie Thatcher dies’ last year.

Much of the liberal left and the Labour Party are ‘rabbits in the headlights’, either unsure which side they are on or frightened to stick their heads above the parapet.  As one commentator stated: 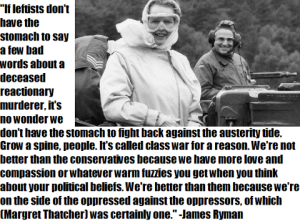 As for ‘outrage’ at the Thatcher death parties, the hypocrisy of Tory politicians and the tabloids is literally unbelievable. Only a few days ago they were dancing round the graves of six children burned to death in order to promote welfare reforms and demonise a huge section of the working class. How can these scum be ‘outraged’ when a historically divisive politician’s death is celebrated. They whinge on about how awful it is to party over the death of a so-called ‘old lady’ whilst desecrating the graves and memories of the innocent. One good thing to come of all of this will be the ‘burying’ (yes, the spin doctors sick term) of the Philpott story by Thatcher’s death. Finally these children may be left in peace, rather than at the mercy of Tory ghouls.

As for radical history; let’s nuke Thatcher’s political legacy, it’s the only way to be sure.