Wooden Shoe Book, 704 South Street, Philadelphia PA 19147. 260 years of bloody colonial history - an illustrated talk. A mighty counter blast to the deoiction of Quaker, Willaim Penn as a peace lover and promoter of brotherhood and religious freedom. It will include: how Penn's family accumulated their wealth over five generations; their constant anti-republicanism; their involvement in the trans-Atlantic slave trade and the bloody colonial British expansion into Ireland, Jamaica and America. It […]
Read More »

Bluestockings Bookstore, 172 Allen Street, New York 10002. 260 years of bloody colonial history - an illustrated talk A mighty counter blast to the deoiction of Quaker, Willaim Penn as a peace lover and promoter of brotherhood and religious freedom. It will include: how Penn's family accumulated their wealth over five generations; their constant anti-republicanism; their involvement in the trans-Atlantic slave trade and the bloody colonial British expansion into Ireland, Jamaica and America. It […]
Read More »
Read More »

Namibia: Genocide And The Second Reich "The ghosts of the Namibian genocide have been reawakened. They return to haunt liberal post-war Germany, and in doing so they force Germany to wake-up to a very uncomfortable fact that the dark racial theories that helped inspire the Nazis run much deeper into German and European history than most people want to acknowledge." The powerful documentary by David Olusoga (BBC) is the story of Germany's forgotten genocide. It takes a sensitive and […]
Read More »

Rasicm: A History: Part 1 The first part of Racism: A History was screened in March this year on BBC4. Partly filmed at Bristol Radical History week last year, the first of this excellent three part documentary deals with the rise of transatlantic slavery. Bristol Radical History Group think this is one of the best documentary series we have ever seen on the BBC. What did other viewers think on the BBC website? Here is a selection: "This should be shown in every secondary school in the country. […]
Read More » 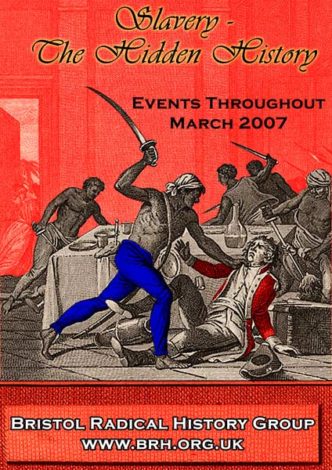 Adam Hochschild: A multi-award winning author, his first book Half the Way Home: a Memoir of Father and Son, was published in 1986. It was followed by The Mirror at Midnight: a South African Journey, The Unquiet Ghost: Russians Remember Stalin, Finding the Trapdoor: Essays, Portraits, Travels, King Leopold's Ghost: a Story of Greed, Terror and Heroism in Colonial Africa and Bury the Chains: Prophets and Rebels in the Fight to Free an Empire's Slaves. His widely read books have won numerous […]
Read More »

Jim McNeill, local historian, storyteller and member of Living Easton will lead us on a walk that explores the history of Bristol Blue glass and reveals its links to slave money. From Ye Shakespeare Public House, (Victoria St) to The Ostrich Public House. A walk along the River Avon, through the districts of Redcliffe and Temple, Bristol, to explore the sites of the city's glasshouses and how they were sustained by colonial expansion and Bristol's involvement in the slave trade. Read an […]
Read More »

Pontecorvo's memorable sequel to Battle of Algiers sees Brando in finely ambiguous form as the drunken, cynical Sir William Walker, a British agent sent to the Caribbean island of Queimada in the mid-1800s to stir up a native rebellion against the Portuguese sugar monopoly; ten years later, he is forced to return there to destroy the leader he himself created, in order to open up trade with Britain. Falling between epic adventure and political allegory, the film is occasionally clumsily […]
Read More »

Sugar and Tobacco: Drugs of Capitalism - Dave Cullum This lecture studies the impact of Bristol's international trade on the developing industrial economy of England in the 18th and 19th centuries, with a focus on diet, nutrition and addiction amongst the new urban proletariat…. Listen to this talk: Download this lecture The Anti-slavery Movements in Bristol - Madge Dresser There were three anti-slavery campaigns in Bristol between the late eighteenth and the early twentieth centuries: the […]
Read More »
This website uses cookies for comments, shopping and to gather stats for our geeky pleasure. Read More Accept Reject
Privacy Policy