The 1984/5 Miners’ strike changed their lives and for the feisty Women Against Pit Closures there was “No Going Back!”

Anne-Marie Sweeney’s film Going Through the Change!, made for National Women Against Pit Closures (NWAPC), shows a fearless, feisty movement that has reverberated throughout the struggles of working-class women over the past 30 years.

Not confined to the miners’ strike of 1984-85, the film reveals how members of WAPC have never stopped supporting other women in solidarity. The film is not a nostalgic look back at the time but a contemporary testament to all those who fight injustice today.

Joined by stars from picket lines, peace camps and war zones, Going Through the Change, features some of the most experienced frontline voices of the past 30 years.

Inspiring!  STRONG WOMEN all over the place, wonderful women! We need each other! 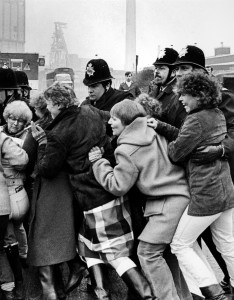