Cyril Pearce is Britain’s foremost researcher into World War 1 conscientious objectors (COs) and war resisters. His book ‘Comrades in Conscience‘ looked at the anti-war movement in Huddersfield. Since then, Cyril has extended his work to look for other ‘Huddersfields’ and has created a database of British COs – the Pearce Register of British Conscientious Objectors The database currently contains details of almost 20000 men who refused to fight in the war and is an invaluable tool for any local research. The 350 names we have published for Bristol are extracted from Cyril’s database.

The database has enabled the creation of maps of all the British counties plotting numbers and densities of COs and identifying anti-war ‘hot spots’.This research process has exposed hitherto under-researched aspects of the anti-war phenomenon among them an underground network of safe houses and hiding places and, with the collaboration of Irish rebels, an escape route to North America.

Come and hear Cyril talk about his research, including stories of Bristol people who opposed the war.

Cyril Pearce is an Honorary Research Fellow at University of Leeds, School of History. 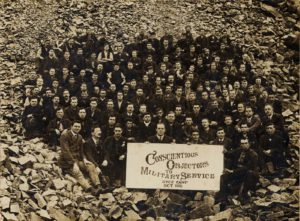