As we mark the centenary of the First World War, this epochal event is usually remembered as a bloody conflict between rival alliances of nations. But there was another struggle as well: between people who regarded the war as a noble and necessary crusade, and a brave minority who felt it was tragic madness and who refused to fight. Writer Adam Hochschild describes this battle in an illustrated talk, focusing on the country where that tension was sharpest, Great Britain.

Adam Hochschild’s writing has usually focused on human rights and social justice, and as a magazine journalist he has reported on such issues from four continents. His seven books include King Leopold’s Ghost: a Story of Greed, Terror and Heroism in Colonial Africa, which won a J. Anthony Lukas award in the United States, the Duff Cooper Prize in England and the Lionel Gelber Prize in Canada. Bury the Chains is the story of the antislavery movement in the British Empire. To End All Wars, about the First World War, has been published in seven languages. His earlier books have included accounts of apartheid in South Africa and of Russians coming to terms with the legacy of Stalin. He teaches at the Graduate School of Journalism at the University of California at Berkeley. 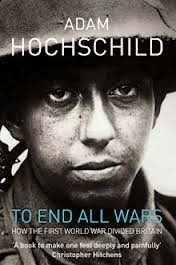