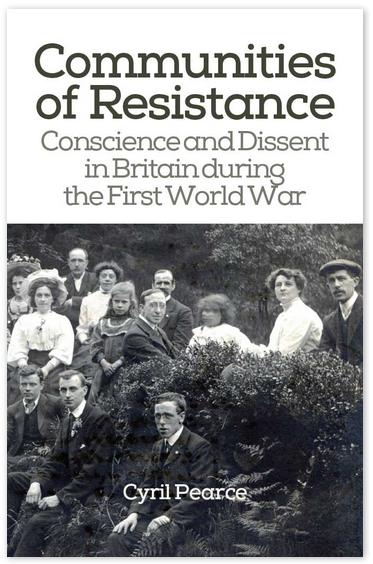 An excellent new book Communities of Resistance has just been published which takes a systematic look at the networks of war resisters connected to conscientious objectors in World War One. Based upon a nationwide survey of COs it appears Bristol was a hot spot of war resistance as the author, Cyril Pearce, explains:

The work which has resulted in this new book, Communities of Resistance, began almost twenty years ago in a study of the 1914-1918 anti-war movement in Cyril Pearce’s home town of Huddersfield. It turned out to be something of a hot spot for anti-war activity and the research findings were published as Comrades in Conscience: An English Community’s opposition to the Great War (Francis Boutle, 2001 and 2014). That work raised the question as to whether Huddersfield was the only such place – and the last twenty years of work have been about trying to find an answer.

To do that the stories of almost 20,000 conscientious objectors (COs) have been gathered, analysed and placed in their ‘home’ areas using the numbers for Huddersfield as the touchstone. It now turns out that, after a survey of the whole of England, Scotland and Wales, involving a detailed study of more than forty specific places, Huddersfield, while still important, can no longer claim to be the most important war resister ‘hot spot’, that mantle has passed to Bristol. In terms of its sheer number of COs it outscores Huddersfield by 427 to 121 and its number of COs per thousand or men of military age – its ‘CO Index’ – outranks Huddersfield by 6.95 to 6.41.

Important in the Bristol war resister story are women like Mabel Tothill, Annie Townley and Annie Chappell as well as determined COs like Walter Ayles – later a Bristol MP – and many more. It is also a story of  an anti-war alliance between Bristol’s pacifists Quakers and the city’s political ‘Left’ in the shape of the Independent Labour Party, the Trades Council and the Socialist Sunday School. Nowhere else in Britain was that coming together so influential.

You can purchase Communities of Resistance here.