In August 1917 a meeting of Forest of Dean Miners passed motions against the conscription of miners and in favour of an immediate negotiated peace to end the war. This talk will discuss the role agitators and conscientious objectors played in this process and what happened next. Ian Wright recently authored Ring Out the Thousand Wars of Old: The Forest of Dean World War One Conscientious Objectors.
Read More »

During World War One, 28 men from the Forest of Dean sought recognition as conscientious objectors rather than be called up to fight. This is the story of these men, the options available to them, the way they responded and what they did after the war. Ring Out the Thousand Wars of Old explores the role that religion, class, culture and place had on these individual decisions. It argues that the actions of the conscientious objectors were an expression of a much wider anti-war sentiment, […]
Read More » 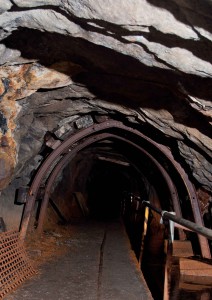 Some of you might remember Rich Daniels and Robin Morgan, the Free Miners who led the tour of Hopewell Colliery on our Warren James day in the Forest of Dean several years ago. Robin started work at the age of fourteen and remembers being lowered down a pit shaft in a bucket on his first day of work. Now nearly eighty years old he has decided to retire! Rich has now taken over the lease of Hopewell Colliery. Rich is planning to develop the mine as a museum and heritage centre and is keen to […]
Read More » 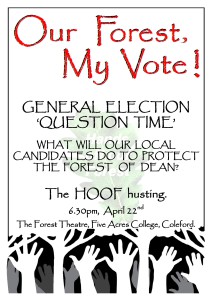 This film is to be premièred on a big screen at Our Forest My Vote (The Hoof Husting) at Forest Theatre, Five Acres college, at 6.30pm on Wed April 22. It will be followed by a Question Time-style debate with the audience, HOOF and parliamentary candidates, asking what will they do to protect our Forest of Dean? Entry: voluntary donation (suggested £1). hoofelection2015.wordpress.com/. Film set to music from Dick Brice, Max, Forest of Dean Brass, Asha Faria-Vare, Billy Bragg & Heathens All, […]
Read More » 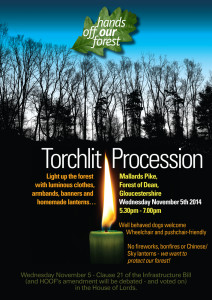 Coal on the one hand, Men on the other examines the impact of World War One on the development of the Forest of Dean Miners’ Association (FDMA), covering the period from 1910 to 1922. In order to understand the response of the leaders of the FDMA to the outbreak of war, this account identifies debates and conflicts within the union in the pre-war years. It also considers the influence that political philosophies and events in South Wales had in the Forest of Dean as a result of migration between […]
Read More »

Class cohesion and spurious patriotism: trade union internationalism in the First World War In this talk Kevin Morgan considers the trade union radicals who from the earliest months of the war took up an internationalist and anti-war stance, and who gathered increasing support as the war went on. Their contribution to the anti-war movement has often been overlooked because of the unions’ majority pro-war stance. Nevertheless, this minority tradition was to receive a further stimulus with the […]
Read More »
This website uses cookies for comments, shopping and to gather stats for our geeky pleasure. Read More Accept Reject
Privacy Policy