In the cabinet in M-Shed dedicated to the Reform Act uprising of 1831 are displayed two objects roughly tubular and of similar length that represent the extent of the uprising and the brutality with which it was put down. One is an arm bone that belonged to one of those who died when the Customs House in Queens Square was liberated and then torched. Peter MacDonald in his book ‘Hotheads and Heroes’ described the scene thus: just as the roof fell in a man toppled out of the end window and crashed […]
Read More »

Not A BRHG Event
This talk is part of the above event at Cardiff Museum, The Old Library, The Hayes, Cardiff CF10 1BH In 2006, The Guardian newspaper ran a series of articles in a search “for the most overlooked moment in British radical history”. The 1831 ‘Bristol riot’ featured in the top ten because of its historical obscurity, somewhat surprising considering the scale of the destruction and the human cost. The reason for this obscurity is related to the pathologized characterisation of the event as the […]
Read More »

"Battling for Bristol" is an evening of films, put on by the Bristol Radical History Group as part of the Journey to Justice month. The series of short films cover Bristol struggles for equal rights. It will include the risings of 1831,1980 and 1986, the demands for decent housing and for equality for women workers, as well as a documentary of the boycott that ended job discrimination on Bristol buses.
Read More » 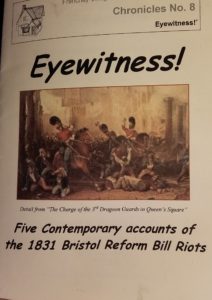 29 October 2016 A small group of us gathered at the statue of William III in Queen Square to remember the three day ‘riot’ of October 1831 which shocked the country at the time and put the government in fear of revolution. This event eventually led to the 1832 Reform Act which lessened the rampant corruption in the form of ‘rotten boroughs’, created new seats in a number of industrial cities and increased the franchise to include some of the male middle class (but not women or the working […]
Read More »
This website uses cookies for comments, shopping and to gather stats for our geeky pleasure. Read More Accept Reject
Privacy Policy