In the cabinet in M-Shed dedicated to the Reform Act uprising of 1831 are displayed two objects roughly tubular and of similar length that represent the extent of the uprising and the brutality with which it was put down. One is an arm bone that belonged to one of those who died when the Customs House in Queens Square was liberated and then torched. Peter MacDonald in his book ‘Hotheads and Heroes’ described the scene thus: just as the roof fell in a man toppled out of the end window and crashed […]
Read More » 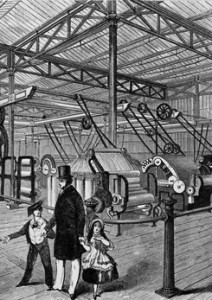 Available as a PDF file here. Another famous, readable and ground-breaking paper by Thompson, this time looking at the imposition of work discipline in the transition to industrial capitalism. He charts the change from the task orientated work of the craftsman/labourer to the division of labour in the '(manu)factory' and the consequent resistance. The use of supervision, fines, wage incentive, preaching, schooling, the suppression of fairs and sports and of course, bells and clocks to form and […]
Read More »
This website uses cookies for comments, shopping and to gather stats for our geeky pleasure. Read More Accept Reject
Privacy Policy