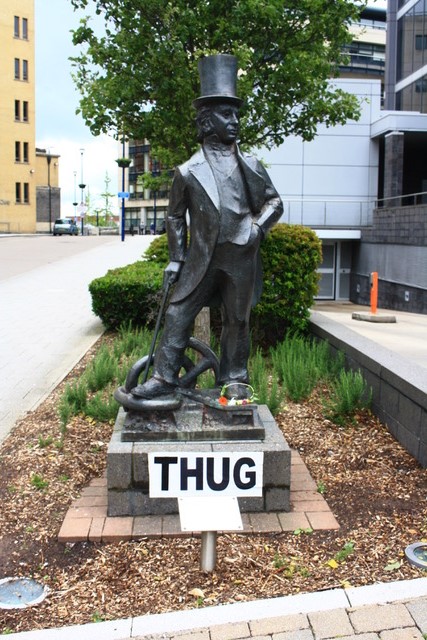 In the cabinet in M-Shed dedicated to the Reform Act uprising of 1831 are displayed two objects roughly tubular and of similar length that represent the extent of the uprising and the brutality with which it was put down. One is an arm bone that belonged to one of those who died when the Customs House in Queens Square was liberated and then torched. Peter MacDonald in his book ‘Hotheads and Heroes’ described the scene thus:

just as the roof fell in a man toppled out of the end window and crashed to the ground dreadfully burnt, while a group who had mistakenly sheltered under the portico were wrapped in molten metal when its lead covering heated, boiled, glowed and then engulfed them.

Most mainstream historians refer to those who took part in the uprising as a drunken mob intent on mindless destruction but it is surprising that E. P. Thompson seems to take a similar view. So it is refreshing to see that Keith Flett takes him to task in his Blog thus:

in the Making of the English Working Class E. P. Thompson takes a rather dim view of it. He sees the crowd as mainly reactionary in intent, seeking to burn books and so on. He goes on to compare it unfavourable with Peterloo 12 years earlier, which he sees as a point on the development of the modern left. Yet there is an issue here. The key speaker at Peterloo was Henry ‘Orator’ Hunt who was jailed for his speech at Manchester on that August day in 1819. Ten years before he had been based in Bristol (trying to run an ultimately unsuccessful brewery) and active in radical politics, so in 1831 was it really a backward mob that was behind the Bristol riot or was it rather a crowed inspired in part by the democratic ideas of Hunt?

Someone who would have had little time for Hunt and his democratic ideas was Brunel who was a special constable during the uprising of 1831 and would have used one of the batons displayed next to the arm bone from the Customs House. There are a few reasons for referring to Brunel as a thug and one of them is these remarks referred to in the display cabinet:

he was heard to complain that his fellow constables did not hit the rioters hard enough.

Five years before breaking heads in Queens Square Brunel started work on the Great Western Railway and over the six years of its construction his disregard for the integrity and safety of the navvies who did the work was manifest in his attitude to accidents. On being told that 131 navies had been seriously injured and taken to Bath hospital between September 1839 and June 1841 he said:

I think it a small number considering the heavy work and the amount of powder used … I am afraid that it does not show the whole extent of accidents in that district.

But hidden from this bland statement is the fact that during that same period over 100 navvies had been killed blasting through the Box tunnel. Indifference to this toll is as thuggish behaviour as breaking heads in Queens Square. Brunel was a great engineer but behind his elevation to the second greatest Englishman (sic) as a Sunday Times poll would have it (no prize for guessing the first) is another story told vividly by Bertolt Brecht in his poem ‘Questions From A Worker Who Reads’, here is the first stanza:

Who built Thebes of the seven gates? In the books you will find the names of kings. Did the kings haul up the lumps of rock? And Babylon, many times demolished, who raised it up so many times? In what houses of gold-glittering Lima did the builders live? Where, the evening that the Great Wall of China was finished did the Masons go?

The Saint-Just Mob salute those navvies, many of whom died building the Great Western Railway.

First appeared on the BRHG Facebook page in June 2019.