A blue plaque for Walter Ayles will be unveiled on Sunday April 17th – the centenary of the date that Ayles was first arrested. Please put this date in your diary. The unveiling will take place from 3.30pm at the house where lived with his wife Bertha in Station Road, Ashley Down. Generous donations have enabled us to raise over £600 to pay for the plaque. Full details will be circulated nearer the date. Come along and help us honour all those in Bristol who bravely opposed the war. Tell your friends.

Walter Ayles was Bristol’s most prominent opponent of World War 1. He was a member of the Independent Labour Party and city councillor for Easton from 1912. When war was declared in 1914 he was the only councillor to vote against a motion offering “whole hearted support” for the war. He became a national executive member of the No-Conscription Fellowship.

In April 1916, when conscription was introduced, Ayles and others were arrested and imprisoned for distributing a ‘Repeal the Act’ pamphlet. On his release he was immediately conscripted and imprisoned until February 1919 for refusing to accept military service. In 1923 he was elected as Labour MP for Bristol North. 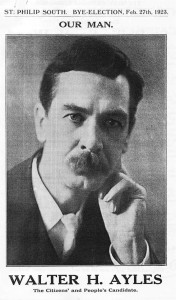 There is a new BRHG pamphlet called Slaughter No Remedy about the life of Walter Ayles. It will be available to buy at the plaque unveiling.