1 July 1916 was the first day of the battle of the Somme. That day saw the highest British casualties of any day in World War 1. The battle continued for four months. Over a million men on both sides were killed or wounded. The British and French armies gained six miles of German territory.

In August 1916 the government released the film ‘Battle Of The Somme’. Sequences in the film were faked and the government specified what music should be played with it. The film was seen by almost twenty million people and caused a sensation.

To mark the centenary of the battle, Bristol Remembering The Real World War One, Bristol Festival of Ideas and Bristol 2014 – in association with Watershed – are presenting the film accompanied by the distinguished pianist Stephen Horne. He will give a short introduction and the screening will be followed by a panel discussion between Professor David Miller (Professor Of Sociology, University of Bath), Humberto Perez-Blanco (Senior Lecturer in Film Studies, UWE) and June Hannam (Professor Emeritus of Modern British History, UWE) chaired by Andrew Kelly (Bristol Festival of Ideas and Bristol 2014). 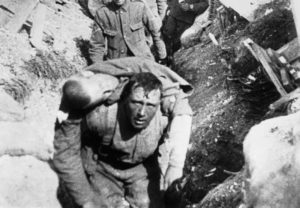