International History From Below network
The international History From Below network is a diverse community of historytellers, historical agitators, artists, independent archivists, history groups, political archaeologists etc. It was founded 2012 in Barcelona to reflect a growing worldwide movement of historical activism and public interest in radical history, and to build an alternative, non-academic resource for the production and transmission of oppositional forms of history. As radical history becomes increasingly popular, more […]
Read More »

Introduction The last few years I have been playing word association games; asking people at work and at the pub to say the first thing that comes into their head about a particular historical event or figure. So typically the English Civil War carries mental images of 'laughing cavaliers', 'miserable roundheads' and blood-thirsty executions of kings, World War I produces 'mud, blood and barbed wire' and recently, PC Blakelock elicits 'brutal mob violence'. Of course some people and events […]
Read More » 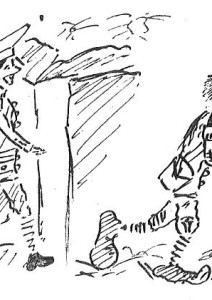 A few days ago Dan Snow wrote a piece entitled Lions and donkeys: 10 big myths about World War One debunked on the BBC website. The tone of the article was strange, in that it seemed to be implying that World War 1 was not as bad as everybody thinks and that and that a lot of working class soldiers quite enjoyed it while upper class officers were martyred. The 10 myths were: It was the bloodiest war in history to that point. No, it was our civil war in the mid 17th century Most soldiers died. […]
Read More »

This is the third meeting in Bristol to discuss opposition to David Cameron's 'truly national commemoration' of WW1 stressing our 'national spirit'. Nationally there are plans to ensure that attention is given to the real causes and effects of the war, rather than an opportunity for our government to re-habilitate this war in particular or war in general. Bristol has long radical traditions and we know there are groups and individuals across the city who will want to ensure that there are events […]
Read More »

This is the second meeting in Bristol to discuss opposition to David Cameron's 'truly national commemoration' of WW1 stressing our 'national spirit'. Nationally there are plans to ensure that attention is given to the real causes and effects of the war, rather than an opportunity for our government to re-habilitate this war in particular or war in general. Bristol has long radical traditions and we know there are groups and individuals across the city who will want to ensure that there are […]
Read More »

Archive.org & Openlibrary.org
These are two related initiative that can be a great help when trying to do a little research form the comfort of ones own computer. Archive.org contains the Wayback Machine which archives snap shot of websites. You can thus see pages on websites as they used to be. However, archive.org also contains free and complete copies of many books that are out of copyright and in the public domain. Openlibrary.org aims to get "One web page for every book ever published". You can search for the details of […]
Read More »
This website uses cookies for comments, shopping and to gather stats for our geeky pleasure. Read More Accept Reject
Privacy Policy