This meeting represents an opportunity to hear different views about the war and discuss how we can ensure that the real World War 1 is remembered by people across the city.

How the war is remembered is as much about the future as the past – while past conflict remains discredited, future foreign military interventions and occupations will remain difficult to sell to the public.

For the majority of people in all the countries involved, directly or indirectly, World War 1 was one of the greatest disasters of the twentieth century. In this centenary year of the start of the war we have been promised debate in the media about the causes and effects of the war.

So far the views expressed on the BBC have ranged from those who think that the war was essential to defend the British Empire (Max Hastings) through to those who argue that the British Empire was undermined by Britain’s involvement in the war (Niall Ferguson). While Jeremy Paxman has been able to refer to conscientious objectors as ‘cranks’.

No space has been found for the voices of those who at the time argued against war on a principled basis. Nor those who today argue that it was a war fought for the interests of the European ruling elites whose price was paid by ordinary people across the world. And that empire, militarism and nationalism always lead to bloodshed and disaster. We have heard nothing of the multitude of both individual and mass forms of resistance to the war on all sides of the national divides being uncovered by radical historians.

If you aren’t able to get to the meeting but want to get involved or know interesting local stories about World War 1 please get in touch. 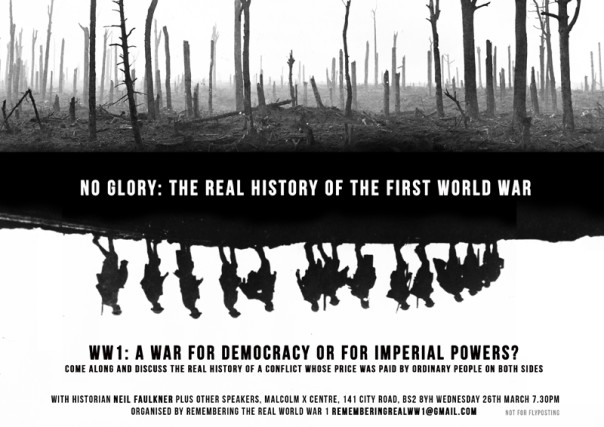