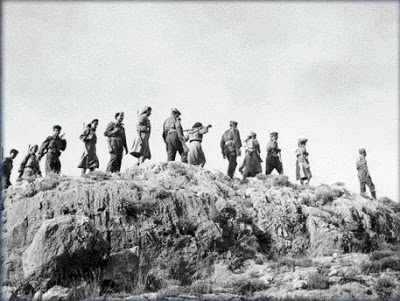 A rare chance to see the 1986 Channel 4 documentary that explored the clash between British forces and the left-wing Greek Resistance against the Nazi occupation in 1944, which led to the ‘Battle for Athens’ and into a bitter three year Civil War. The defeated Greeks fled into exile and waited more than 30 years for the PASOK Amnesty in 1982 that allowed them to return home. In the documentary they tell their story for the first time, alongside the British protagonists. The British Establishment was furious when the documentary was broadcast and prevented it ever being shown again. The producer, Jane Gabriel and Theo Papadopoulos, a political sociologist, will be there to introduce the film and answer questions and discuss the row that followed.

Wikipedia records that it “gave rise to the biggest uproar in the history of British television; the series was banned, all but one copy destroyed …”.

Jeremy Isaacs, in his book ‘Storm over 4: A Personal Account’ (published 1989) writes in defence of the series that, “Greece: The Hidden War did not lie”.