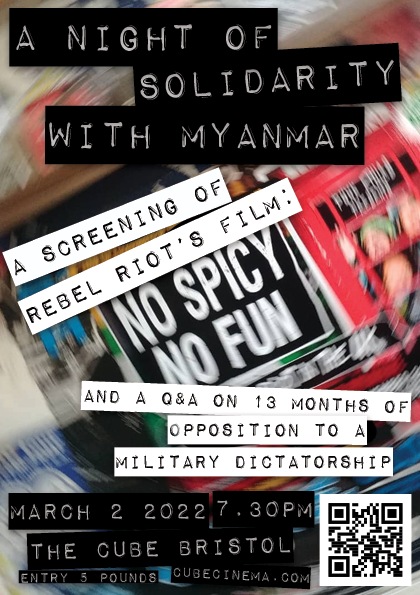 A Night of Solidarity with Myanmar takes place at The Cube on 2nd March from 7.30pm – get tickets here. Early arrivals will enjoy some ‘Myanmar snacks’ cooked up by members of the Myanmar community in Bristol.
Hosted by the local #WithMyanmar support group on FB, it’s aim is to spread awareness, information & understanding of the current situation in Myanmar (aka Burma), and generate support for it’s people resisting the Military Coup there on 1st February 2021. That Military Coup followed arguably just the second ‘almost free’ General Election in Myanmar, on 8th November 2020, since an earlier military coup in 1962. That Coup occurred just 14 years after Myanmar achieved independence from the British in 1948, having been fully annexed by the British in 1885 following a series of Anglo-Burmese wars as the ‘British Empire’ spread outwards from India. You can find more on the history & elections here and here.

A Night of Solidarity with Myanmar comes in two distinct but inter-related parts: First up is a showing of Punk Ethics’ film ‘No Spicy No Fun – The Rebel Riot in the UK’ (57 mins, 2022, directed by Roberta Bononi and Kim Ford – watch trailer) which documents their 2017 tour of the UK and also their Food Not Bombs work in Myanmar. This tour included a visit to Bristol on 22nd October 2017, with a film screening & talk at Base social centre, and a gig at The Lion BS5. After the documentary there’ll be a new 10 minute film from Rebel Riot updating on the current situation.
Rebel Riot, along with countless others, have been involved with opposition to the military junta that took power in Myanmar in a coup on February 1st 2021. Their recent music releases & social media have been used to spread the message of resistance to the coup, see their stirring cover of the Italian antifascist song Bella Ciao here, and their anthemic call to arms One Day here. If you can spare a few pounds, there’s a Food not Bombs Myanmar crowdfunder here.

The second part of the evening will feature a Discussion Panel and Q&A on the present situation in Myanmar, in the 14th month of resistance to the Military Coup. The Panel will include people with recent and direct experience of what’s happening on the ground in Myanmar, where so many continue to oppose the Military through a mix of civil disobedience, strikes, and armed resistance. An opportunity to learn more of the peoples’ struggles for democracy & freedom over the decades; to understand the historic ethnic tensions & conflicts, and the moves towards unity; and perhaps to ponder why the fate of these brave peoples’ are so ignored by the West?

The hosts for the event are the local Bristol-based online support group #WithMyanmar, a mix of Bristolians with an interest in/experience of Myanmar, and people living in the UK after leaving Myanmar. They see their role as follows:

The aim of this group is to show solidarity and support to the people of Myanmar. People have been peacefully protesting against the military coup and are being imprisoned, tortured and murdered.
We invite you to post messages or pictures (the hunger games three finger salute etc) showing your support and solidarity for the Myanmar people. Include #WithMyanmar with your post. It would be good to say where you are from.
This will let the people of Myanmar know they are not forgotten. If you want to give practical support: isupportmyanmar.com  For information: aappb.org

#WithMyanmar has acted as a gathering point for supporters across Europe, including many from the ‘Burmese diaspora’ (people who’ve previously had to flee Myanmar). Info & news, petitions & calls to protests and boycotts, along with images of solidarity & defiance, fill the discussion thread. Offline, members of the group attend solidarity protests in London, help fundraise, and have extensive contacts within Myanmar itself, often with people desperately on the run from the military. They know many who’ve been imprisoned, or murdered by the military dictatorship. They also support people who’ve left Myanmar, both over the last year or before, and this includes some 30+ healthcare workers who are currently working at a Bristol hospital & receiving further training – which they intend to put to good use when they can return to a free & democratic Myanmar very soon! 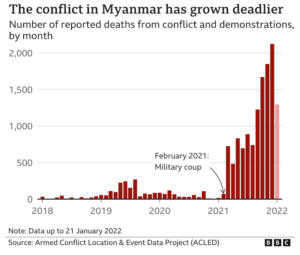 The Military Coup has been a bloody and brutal one, as the military reacted to the initial burst of non-violent civil disobedience with deadly force and live fire into protests. The Assistance Association for Political Prisoners (Burma), or AAPP, estimates over 10,000 arrests and thousands dead, although real figures will be much higher. Hundreds of thousands, probably millions, have become internally displaced, or have fled across borders. Many younger people have left urban areas to join up with the ethnic guerrilla armies in the highlands, lowlands and border regions, or to form their own growing Peoples Defence Forces (PDF) units. In response the military has resorted to the aerial bombarment of villages & towns, followed up by a scorched earth policy – literally burning entire villages and communities to the ground. There are regular and reliable reports in the English language news outlet Myanmar Now of both the barbarity of the military, and the peoples’ resistance. For example, two young women students have been imprisoned for 7yrs each for donating less than £3 to a fund for displaced peoples, and face further absurd charges. It’s worth noting too that last weekend the Myanmar Military joined the short list of countries supporting the Russian invasion of Ukraine! It’ll come as no surprise to learn that Russia, along with China, were the two largest suppliers of weapons to Myanmar in the period 2010-2020.

The overwhelming firepower of the Military Coup is eerily reminiscent of the situation the people faced after the British annexation of Myanmar in 1885. Back then the people resisting authoritarian rule were also faced by superior weapons, and the British wielding them were just as barbaric and uncaring about those they mowed down. As BRHG noted in this article:

Despite the military defeat, the Burmese fought a ten year guerrilla war against British rule which was only finally broken by meting out collective punishments to the civilian population. Villages were burned and the property of villagers either confiscated or destroyed. The British policy of overwhelming reprisals against villages suspected of assisting the insurgency eventually brought the country under control. British colonialism was triumphant. (read full article).

Many radical critics of the national liberation movements, that saw peoples’ escape the clutches of the ‘British Empire’ after WW2, have argued that national liberation without social revolution leaves you in pretty much the same place – with a new set of rulers as murderous as the foreigners were. For the people of Myanmar, after almost 75 years of military rule in some form or another, this has proved to be depressingly true. But this new & younger generation of activists, having tasted a degree of freedom & democracy these last 10 years, and being exposed to other ideas and influences especially via the internet, they may sound the death knell for the hated military. Because they cannot countenance a return to the old order – and are prepared to die in their struggle for freedom – because they see no other alternative.
Solidarity #WithMyanmar! 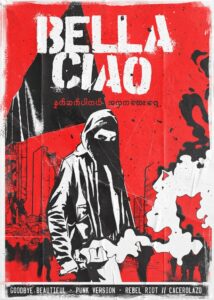