In 1917 in Britain, one of the government’s worst nightmares was developing. There had always been a ‘hard-core’ of opposition to the war on political, moral & religious grounds. Over the course of the war this opposition had developed as conscription was introduced. It began to be joined by industrial militancy as working conditions came under attack. With the February Revolution those opposed to the war could see an alternative and a way for the war to end. The authorities understood the […]
Read More »

Not A BRHG Event
At Waterstones, use Union Street Entrance. Sheila Rowbotham recounts the interweaving lives of four women and two men – Helena Born, Miriam Daniell, Gertrude Dix, Robert Nicol, and William Bailie – as they migrate to America from Bristol, Edinburgh and Manchester. Radicalised by the rise of socialism, they cross the Atlantic dreaming of liberty and equality. Their lives open fascinating slants on both political and cultural movements and upon influential individuals like Walt Whitman, Eleanor […]
Read More »

Not A BRHG Event
The Haymarket, Chicago and Mayday On the evening of Tuesday May 4th 1886 near the Haymarket, Chicago, armed police attempted to violently disperse a few hundred members of a peaceful demonstration called to protest about the police killing of striking workers. As the police moved against the crowd a bomb was thrown by an unknown person wounding several of their number. In the ensuing chaos the police opened fire slaughtering demonstrators and police alike. In the days following the incident […]
Read More » 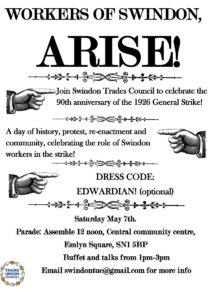 Dear Friends and comrades, Swindon TUC would like to invite you to an exciting event to commemorate the 90th anniversary of the 1926 General Strike, to be held from midday on Saturday May 7th . As part of an afternoon of activities, we will assemble at midday at Central Community Centre (Emlyn Square, Swindon, SN1 5BP) for a march to re-enact and commemorate the large marches that took place in Swindon in 1926 to support the strike. Edwardian dress is encouraged, but not compulsory! Union […]
Read More »

Hesitant Comrades is the first book to explore the actions and attitudes of the British working class towards the Irish Revolution of 1916–21.With sources ranging from newly discovered writings to reports of police spies, Geoffrey Bell brings to light new evidence. He shows how the leaders of British trade unions were complicit in Belfast loyalist sectarianism and he explores the troubled nature of the Labour Party's relations with its Irish community, and how the Bolsheviks criticised British […]
Read More »
This website uses cookies for comments, shopping and to gather stats for our geeky pleasure. Read More Accept Reject
Privacy Policy