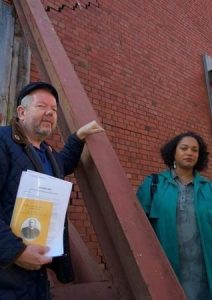 Sign the petition. Throughout time Bristol has played a key role in events, ideas and literature that have shaped people’s freedom and parliamentary reform. Previously these topics have been neglected because they don’t quite fit the national narrative. The narrative has to change for the 21st Century. By recognising this there’s a great chance Bristol can lead the way. For a fleeting moment there’s a golden opportunity to make it happen; a vital retelling of the role Bristol has played on the […]
Read More »

Not A BRHG Event
Meet at 11.30am Redcliffe Caves, Phoenix Wharf, Redcliffe Way, Bristol BS1 6SR Walk ends at Bristol Cathedral at 1.30pm (approx.) After popular demand the Countering-Colston group are re-running their recent history walk. Starting with St Mary Redcliffe church, this walk takes in other historic Diocese of Bristol churches in the city centre where ‘the life and work’ of Edward Colston is still provided religious legitimacy on an annual basis. Along the way we will share the most recent historical […]
Read More »

Not A BRHG Event
An international team of artists and film-makers are working together to resurrect the voices of three generations of women impacted by British slavery in a digital installation: Daughters Of Igbo Woman. Events will take place in Bristol at Georgian House Museum and Greenbank Cemetery in August and the Bearpit in October this year, accompanied by school workshops. Daughters of Igbo Woman is supported by Arts Council England, Bristol Culture and Journeys to Justice. Ros Martin, Project Director […]
Read More »

It's official, today the board of the Bristol Music Trust (BMT) have announced the Colston Hall will be changing its name. Congratulations to the Counter-Colston campaigners and their supporters for all the work they have done over the last few years to highlight this issue. We have been having a laugh today reading some of the reactions... Apparently Tory Councillor Richard Eddy will now be boycotting the hall....is this because he will only go to venues that are named after slave-traders? […]
Read More »
This website uses cookies for comments, shopping and to gather stats for our geeky pleasure. Read More Accept Reject
Privacy Policy
Necessary Always Enabled