On Wednesday the 16th October, Bristol will be hosting Jonina Abron-Ervin and Lorenzo Ervin as they give talks on their involvement in the US Black Power Movement and struggles that continue to this day. Jonina is the author of Driven by the Movement: Activists of the Black Power Era and will speak about her interviews with some 20 Black Power Activists as well as her own activity in the Black Panthers, where she became editor of the Black Panther Newspaper. She will detail the experiences of […]
Read More »

Karl Marx remarked that the only way to write about the origins of capitalism is in the letters of blood and fire used to drive workers from the common lands, forests, and waters in the sixteenth century. In this collection of essays, George Caffentzis argues that the same is true for the annals of twenty-first-century capitalism. Information technology, immaterial production, financialization, and globalization have been trumpeted as inaugurating a new phase of capitalism that puts it beyond […]
Read More »

Using everyone’s favourite bank manager Captain Mainwaring of Dad’s Army fame, Alan explains where all the bailout money went in the 2008 meltdown and current economic crisis. Neoliberal myths, lies and statistics about the public deficit such as the commodity theory of money, supply and demand, ‘rational’ consumer choices and ‘alternatives within capitalism’ are de-bunked using sources from the Guardian to the President of the EU Central Bank.
Read More »
Read More »
Read More »

What's behind the protests that mobilized hundreds of thousands of Brazilians and shocked the country in the middle of the Confederations Cup? Who are the protesters and what are their flags and demands? What are the direction and the consequences of the mobilization? Two eye-witnesses will give a visual report on what happened in Sao Paolo and try to answer these questions.
Read More » 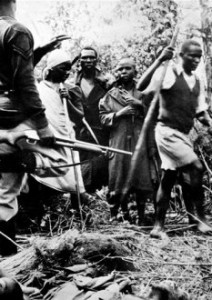 The Strange Paradox of ‘Ding Dong’:”political correctness gone mad”
Last night I bought a copy of the Daily Mail (for the first time in my life) as I am into surrealism in a big way. I just had to do it. There several headlines which took my fancy: "BBC 'Witch' Song Insult to Maggie" (front page) "....and now even a police sergeant tweets meassages of hate" (front page) "I hope Thatcher's death was degrading and painful, tweets sick Scotland Yard sergeant" (page 7) ...and unbelievably on their website headlines: "'They danced in the streets when Hitler died […]
Read More » 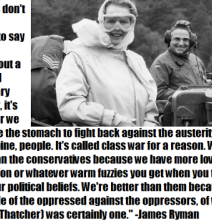 Vasquez: All right, we got seven canisters of CN-20. I say we roll them in there and nerve gas the corpse just to make sure. Hicks: That's worth a try, but we don't know if it's gonna affect her. Ripley: I say we fire the corpse into low earth orbit and nuke it. It's the only way to be sure. Hudson: Fuckin' A! Burke: Hold on a second. Thatcher's history has a substantial dollar value attached to it. Ripley: They can bill me. Burke: Okay. This is an emotional moment for all of us. I know that. […]
Read More »

Running down Whitehall with a black flag. Memories of anarchism in the 1960s Di Parkin was a revolutionary activist from the early 1960s to the 1980s. She was employed as a community worker and an Equal Opportunities Adviser. Her PhD was on opposition to the myth of National Unity in Second World War Britain and she published a book on the history of a militant coal mine (Betteshanger) in Kent Now retired, she devotes most of her energy to the Bristol Radical History group: working on recording […]
Read More »
This website uses cookies for comments, shopping and to gather stats for our geeky pleasure. Read More Accept Reject
Privacy Policy
Necessary Always Enabled