Prof. Steve Poole (UWE Bristol) will give an overview of the Recovering the Regional Radical Press in Britain 1968-88 project, highlighting the publications in the exhibition on Level 2.

“From the late sixties to the mid-eighties, small, co-operatively produced local and neighbourhood papers played an important role in grassroots radical politics across the British Isles. Some achieved passing prominence with occasional news scoops, but most are unremembered now and their history is overlooked. This project, led by Phil Chamberlain (University of Bath) and Steve Poole (UWE) seeks out those papers, reconnects with the people who produced them, and re-evaluates their impact on sustainable and autonomous community action.

In the early 1980s, at least 80 radical local papers were being produced, from Aberdeen to Exeter, mostly by co-operatives of self-taught volunteers, writing, typing, designing and pasting up by hand with Letraset and cow-gum, and making use of affordable new offset litho technology for printing. Many worked in partnership with community bookshops and print shops – two more distinct developments in the period.

Some titles broke stories that mainstream papers wouldn’t touch. Rochdale Alternative Paper printed allegations of sexual misconduct against city MP Cyril Smith in 1979, none of which would resurface in the commercial press until after Smith’s death in 2010. Brighton Voice campaigned effectively on housing issues and became a mouthpiece for the city’s squatting movement. Swansea’s Alarm, by far the most cheaply and roughly produced of the lot, garnered a reputation for exposing corruption on the city council and ran a slate of candidates for election in 1979.

At the Bristol Radical History Festival, you’ll be able to see and read copies of some of these papers and take a look at our mapping database. You may know of some papers we haven’t found yet!
Website: Recovering the Regional Radical Press in Britain 1968-1988″ 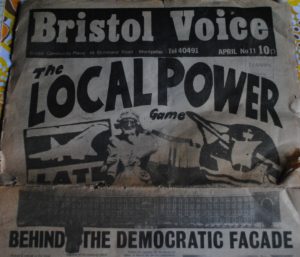