Thursday's Child Best remembered as a suffragette, Sylvia Pankhurst was also a passionate supporter of the Russian revolution, a founder of the British Communist Party and a talented visual artist. Fighting for women to have the vote at the beginning of the century, she became a campaigner against colonialism in Africa after the Second World War. She dedicated her life to fighting oppression and injustice. Sylvia Pankhurst is played by Sharon Morgan and this programme, made for Channel Four, is […]
Read More »

Not A BRHG Event
Dorset’s second Radical Bookfair will take place on Saturday 4th August 2018 at Beaufort Community Centre, Beaufort Rd, Bournemouth BH6 5LB (Nearest railway station is Pokesdown). All rooms have access for disabled people. Our e-mail address is dorsetbookfair@riseup.net Bristol Radical History Group will be giving the following talk.... How to stop a war: The German Servicemen’s Revolt of 1918 The German revolution of 1918-20 and its violent suppression is a little known event in the British […]
Read More » 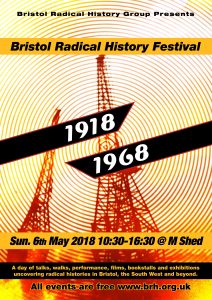 As the second Bristol Radical History Festival rapidly approaches, it is also worth doing a shout out for several other 1968 events happening in the coming weeks. Remember-Discover-Research-Critique-Celebrate-Commemorate-Repeat and Exceed the <événements> of May 1968! Here’s a quick round-up, but there will be others.   National and international events (Tuesday 1st May 2018 onwards) Film screenings: ‘1968 Festival. A festival inspired by ‘1968’ and organised by the Radical Film […]
Read More »

In May 68, visual culture was deployed as a form of radical protest, not just in the Parisian Atelier Populaire where students and faculty staff took over the Ecole des Beaux Arts, putting print on the map as a tool of global resistance movements, but around the globe from Italy to Mexico, from Japan to the United Kingdom, from the United States to Yugoslavia. These were "weapons in the service of the struggle… an inseparable part of it. Their rightful place is in the centres of conflict, that […]
Read More »

We are very pleased to be hosting an exhibition of political posters from the 1968 movements created our friends at the Interference Archive in New York. From the Atelier Populaire (print collectives) of France’s insurgent 1968 to the radical posters of the Prague Spring and the university occupations in the United States and Mexico City. This exhibition is an an entry point into the cultural production of the global '68 moment and its continued influence on politics, art, and design today.
Read More »

Di Parkin, Secretary of Bristol Radical History Group shares her memories of 1968 from the Vietnam anti-war demonstrations and the women’s equal pay strike at Ford's Dagenham to the 'Prague spring', the Russian invasion of Czechoslovakia and Enoch Powell’s 'rivers of blood' speech. Watch this talk
Read More »

Professor Bush offers a critical reassessment of the events of 1968 and their aftermath. He will look at May '68 in Paris in a broader context of global protest and changing narratives of political analysis and authentic action. He will give a brief account of his own experiences of the summer of 1968 at the Democratic Convention in Chicago, in the wake of the assassinations of Martin Luther King, Bobby Kennedy and Malcolm X. Thirdly, Professor Bush will examine a late echo of the sixties in the […]
Read More »

Not A BRHG Event
Members of Plan C, who have just returned from volunteering on civil projects in Rojava (the Democratic Confederation of Northern Syria) will be reporting back on Rojava and the wider Kurdish movement. The revolution is based on direct democracy, gender equality and ecology, and seeks to create a solidarity economy. How can we in the West learn from what is happening and offer our solidarity? Followed by question and answer session. We will also be screening some short films in tribute to Mehmet […]
Read More »

When a new Naomi Klein book comes along it is certain to be a part of the zeitgeist. So the recent publication of No Is Not Enough: Defeating the New Shock Politics is no exception. Classics such as No Logo (1999) and The Shock Doctrine (2007) added important critiques to the public debate about neo-liberalism. This Changes Everything: Capitalism vs. The Climate (2014) documented the environmental impossibility of the current fossil-fuelled trajectory of business as usual. No Is Not Enough […]
Read More »
This website uses cookies for comments, shopping and to gather stats for our geeky pleasure. Read More Accept Reject
Privacy Policy
Necessary Always Enabled