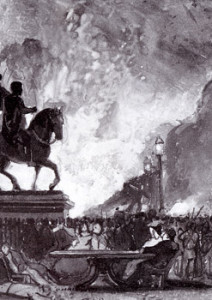 I was fortunate enough to acquire, among a collection of books, both the 1884 and the considerably expanded 1906 edition of Arrowsmith’s Dictionary of Bristol, edited by Henry J. Spear and J. W. Arrowsmith. Concurrent with other research I have been conducting into the Bristol riots of 1831 I perused the entry in each edition and was struck by the volume of revisions. It should initially be noted that the account given in the 1906 edition is substantially longer. As such it is perhaps the detail […]
Read More »

From 1916-19 many men & women in Bristol organised opposition to conscription. Dozens of Bristolians were imprisoned as conscientious objectors. These included Walter Ayles, who was a city councillor and Bristol's most prominent opponent of World War 1; the three Reinge brothers from Totterdown who were all imprisoned for refusing to join the army; George Barker who hid fugitives in the cellar of his bicycle shop in Bedminster; the Whiteford brothers from St George, one of whom refused to […]
Read More »

Opposition to WW1 in Bristol in August 1914 War enthusiasm? There is a perception in Britain that popular patriotic pressure drove politicians to declare war on Germany on August 4th 1914 and that the population somehow desired war. This so-called ‘war enthusiasm’ has been characterised in the popular memory as: "cheering crowds outside Buckingham Palace, long lines outside recruiting offices and of soldiers marching away singing 'Tipperary'" . These images have been recently promoted by TV […]
Read More »

A few years ago Bristol Radical History Group published a pamphlet entitled Tolpuddle and Swing: The Flea and the Elephant which critiqued the centrality of the Tolpuddle Martyrs incident (1833-34) to Trade Union history whilst the massive uprising of rural wage-labourers which occurred a few years previously, known as the ‘Captain Swing riots’ (1830-31), had been pretty much ignored. The pamphlet essentially came about because of admirable efforts by Trade Unionists in Wiltshire and Hampshire […]
Read More »

Eastville Workhouse, BRHG research project There is rightly scandal in the press at the 800 babies buried in unmarked graves in Galway. But this was not a unique occurrence. Bristol Radical History Group BRHG has established that 3,300 adults, children and babies were buried in unmarked graves in an old cemetery (now a piece of open ground) behind the Eastville Workhouse on Fishponds Road in Bristol. The workhouse death records from 1855 to 1895 establish these burials took place. Some human […]
Read More »
This website uses cookies for comments, shopping and to gather stats for our geeky pleasure. Read More Accept Reject
Privacy Policy