From the earliest days of recorded history river pilots have navigated ships through the dangerous waters of the Bristol Channel and up the river Avon, with its twisting bends, shifting sand banks and strong currents. In the early nineteenth century, Bristol was granted rights to compulsory pilotage over the whole of the Channel. The Society of Merchant Venturers managed and regulated licenced pilots on behalf of Bristol Corporation. However, pilots were self-employed and operated in competition with one another. Pilots would sail up and down the Channel hoping to catch first sight of an incoming vessel. Competition was fierce. The first pilot to board an incoming ship secured pilotage rights, a tradition that was long established and well supported by the piloting community.

This pamphlet charts the experiences, in the nineteenth century, of Bristol’s pilots, and their assistants, in their struggle to defend their jobs and their traditional way of working, particularly as steam power emerged to replace sail. Their relationship with the shipowners, masters and city authorities was a complex one, and broke down periodically into open conflict. They lived almost exclusively in Crockerne Pill, a small village, five miles from Bristol, situated on the south side of the river Avon. Pill people exhibited a lack of deference and were looked upon by the Bristol authorities, and many town-dwellers, as disorderly and difficult. As the nineteenth century progressed, however, the realization took hold that the interests of the pilots and watermen of Pill had much in common with trade unionists in Bristol and the wider labour movement. 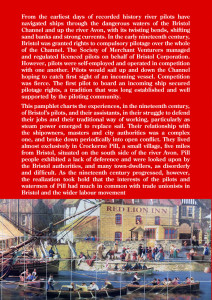