Angela Carter was one of the late 20th century’s most acclaimed novelists and came of age as a writer in 1960s Clifton, where she experienced life in post-war Bristol, looking at a horizon bombed-out and derelict, but also booming with reconstruction schemes. On this guided virtual tour through Clifton and Hotwells, revisit the places and counterculture that inspired her writing, in a society undergoing transformation and renewal so profound, that she declared: “Truly, it felt like Year One.”

This is a free event, bookable through Eventbrite.

Rich Grove has also designed a downloadable map of countercultural Clifton and Hotwells, called ‘Truly, It Felt Like Year One’: A Guided Tour of Angela Carter’s 1960s Bristol’ with content produced by Stephen E. Hunt, Charlotte Crofts and Maria Mulvey-Roberts. 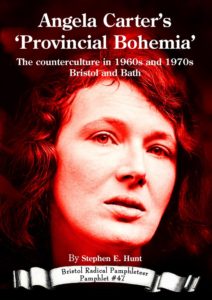