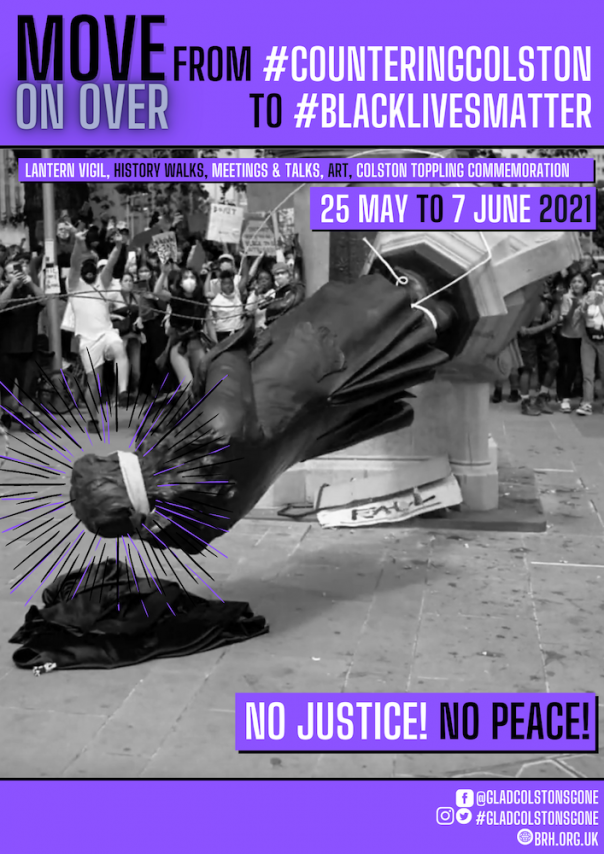 All over the world I’ve seen grandchildren of slave masters tearing down slave masters statues – over in England they put it in the river.

May 25th is the first anniversary of the death of George Floyd at the hands of police in Minneapolis, USA which sparked off a resurgence of the Black Lives Matter (BLM) movement across the world. In Bristol, less than two weeks after Floyd’s murder, hundreds of BLM protestors pulled down the statue of the leading slave-trader and city icon Edward Colston. An action which also reverberated globally.

One year on Bristol Radical History Group present a fortnight of events celebrating the success of local campaigns challenging the celebration of the slave trader Edward Colston by Bristol’s elite institutions which culminated in the historic action of the Black Lives Matter movement last June.

Black communities and those who stand with them in Britain have never accepted racism and injustice without substantial resistance. That resistance has come in many forms creating a radical tradition, much of which remains obscured. These events reveal the radical opposition of Black communities in post-war Britain to racism and racist policing and analyse the consequent reaction of the British state.

All the events, history walks, talks, films and discussions are free but we will be asking for donations to support the Colston 4 defendants campaign – please donate to the crowdfunder Support the Bristol Topplers’ Defence Fund! here.

These events are organised with the @GladColstonsGone – Coalition for Solidarity with the Colston Defendants (CSCD), Countering Colston, Tangent Books, Bristol Copwatch, the Institute of Race Relations, M Shed and The Cube Microplex.

The following programme of events will be updated regularly.