It is with great sadness that we report the death of Jayne Dentith on 5th July.

Jayne was one of the Red Hot Frilly Kickers Can Can troupe who literally kicked off the first ever Bristol Radical History Group event in October 2006. The Frilly Kickers played the role of the ranting women who with radical Quaker preacher James Nayler blasphemously recreated Christ’s entrance into Jerusalem on Palm Sunday in Bristol in 1656. Jane is shown below protecting James Nayler (Ben) from arrest by Parliamentary soldiers outside the Grand Hotel on Broad Street. 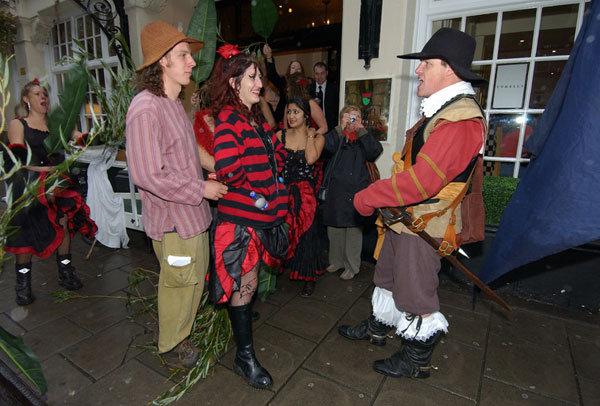 Jayne was a member of the legendary Easton Cowgirls netball teams and a vital part of a social scene that also traveled the world. I have many memories of Jayne but one that sticks in my mind was during the Easton Cowgirls basketball tour of the Zapatista communities in the South East of Mexico in 2006. On meeting the Autonomous Council for the municipality who were wearing balaclavas to hide their identity, Jayne was not overawed. She questioned them closely about how Zapatistas dealt with violence against women, something that most visitors would not have dared to do. I could see the respect she got from the members of the Autonomous Council in their eyes. Jayne was never afraid to ask the difficult questions or to confront difficult situations, something she maintained to the very end.

We send our love and best wishes to Jim and her son Oscar. She will be missed very much.