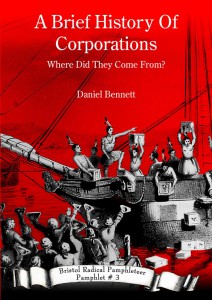 Where did corporations come from and how did they get the same legal rights as individuals? This pamphlet attempts to answer these questions in a manner that will not cause the reader too much distress. But if you want more jokes the pamphlet also includes a three page comic by Andy Singer which addresses the same questions. "An entertaining and educational read" - Noam Chomsky (As relayed to Dan by Ward Morehouse, honest)
Read More »
This website uses cookies for comments, shopping and to gather stats for our geeky pleasure. Read More Accept Reject
Privacy Policy