June Hannam will focus on women in Bristol who opposed militarism and sought a negotiated peace. The most high profile activists were Mabel Tothill, Annie Townley and Mrs Higgins, all socialists from the Independent Labour Party (ILP). Others, such as the Quaker Helen Sturge, had been involved in the pre-war suffrage movement. The talk will explore what women did to push forward their cause and the ideas that underpinned their peace activism, in particular the extent to which they were gendered. Women used spaces that brought them together as women, notably the Women’s International league, but also worked through mixed sex organisations. It will be suggested that although peace campaigning could bring women together across class and party lines, for socialist women peace would lay the foundations for a new society that could only be achieved through party politics after the war. 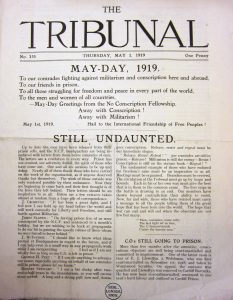 “An advance of ¾d on khaki work”: Trade Unions and Manchester’s working women during the First World War [Bernadette Hyland]

Bernadette Hyland is a founder member of the Mary Quaile Club, a Manchester group that organises  events which  link  working class history with present day struggles.  She  has recently transcribed the Minutes of the Manchester and Salford Women’s Trades Council 1895-1919. In this talk she will explore the importance of the MSWTUC and its key role during the First World war  in opposing the exploitation of women workers. She will also talk about the life of MSWTUC organiser Mary Quaile, a Mancunian Irish woman, who went on to to become one of the foremost women trade unionists in Britain in the 1920s. Mary was a pacifist and member of the No Conscription Fellowship,  and she had brothers that fought in the war. Bernadette will draw links with modern day women trade unionists including the Durham Teaching Assistants and LSE cleaners.