Captain Jack White DSO attracted adjectives like jam does wasps – flamboyant, gallant, romantic, handsome, idiosyncratic, incorrigible – and every one of them was appropriate.

He was a Presbyterian from the northern part of Ireland who fought in the Boer War, became the first commander of the Irish Citizen Army in the 1913 Dublin Lockout, was arrested for sedition during WW1, fell foul of all the police/paramilitary/governmental authorities in Ireland between 1913 and 1936, and participated in the Spanish Civil War. As well as travelling the world, Jack also participated in the Tolstoyan Whiteway Colony in Gloucestershire.

On a more profound level his philosophy, or more correctly, his mentalite was a spontaneous form of anarchism. He did not describe himself as such until he went to Spain in the late thirties where he was overtly visiting as a Red Cross administrator, but in actual fact was assisting the CNT-FAI or Spanish anarchist movement. Here he met Emma Goldman, and also wrote some pamphlets which illustrate his singular take on Irish nationalism and on the syndicalism of Irish labour leader James Connolly. 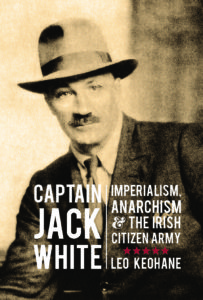