Some reaction to today’s memorial unveiling
Download the programme from the unveiling ceremony. The BBC put an article on their website: Eastville Workhouse's 'forgotten paupers' memorial unveiled. Beautiful, moving memorial this morning on Rosemary green, for 4000 men, woman & children buried in unmarked graves. pic.twitter.com/SP6jvzHK6R — Hannahbella Nel (@Hannahbellaaaa) November 16, 2015 A follow up on our story with @BrisRadHis about unmarked paupers' graves: pic.twitter.com/DeWhWHodIq — BBC Inside Out West (@InsideOutWest) […]
Read More »

In 2012, radical historians poring over old maps of east Bristol discovered a disused burial ground at Rosemary Green, close to the site of Eastville Workhouse. Over the following years, a team of local researchers revealed that in the nineteenth century more than 4,000 men, women and children from the workhouse had been interred in unmarked graves. Built in 1847 as a result of the New Poor Law, Eastville Workhouse was the largest in the Bristol area housing over a thousand inmates. 100 […]
Read More »

Members of the Eastville Workhouse Memorial Group have used death registers at Bristol Record Office to identify the people given pauper's burials at Rosemary Green adjacent to the site of Eastville Workhouse. They found the names of over 4,000 men, women and children buried in unmarked graves and evidence of how Poor Law Guardians kept the cost of burying inmates as low as possible. As part of Explore Your Archive week, join us at this free drop-in session to see these interesting archival […]
Read More »

In 2012 some radical historians poring over old maps of East Bristol came across a disused burial ground at Rosemary Green close to the site of Eastville Workhouse at 100 Fishponds Rd. Over the following years a team of local researchers revealed that more than 4,000 men, women and children, inmates of Eastville Workhouse, were interred in unmarked graves in Rosemary Green from 1851-1895. 100 Fishponds Rd: Life and death in Victorian Workhouse is a summary of their research and a history of […]
Read More »

On Rosemary Green, Eastville, BS5 6LB. Residents of East Park Estate are to unveil a memorial to more than 4,000 men, women and children who died in Eastville’s notorious Workhouse between 1851 and 1895 and were buried in unmarked paupers’ graves in what is now Rosemary Green. A six foot Welsh slate standing stone, carved by local stone mason and sculptor Matthew Billington using designs from pupils of May Park Primary School, will be erected on the disused burial ground which has remained […]
Read More » 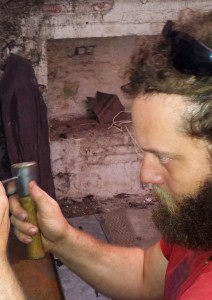 Not A BRHG Event
Funeral ceremonies were very important to middle class Victorians, with detailed and often elaborate rituals to mark the passing of cherished family members and those deemed ‘important’. But for paupers who died in the workhouses, things were very different. Building on continuing research into the unmarked graves behind the site of Eastville workhouse, Bristol, this talk exposes the contrast in treatment between rich and poor in death. This meeting is organised by UWE Regional History Centre as […]
Read More »

Tuesday 4th August 7.30pm Scout Resource Centre, Gadshill Rd, Eastville, BS5 6PU All Welcome As you probably know, East Park housing estate was originally the site of Eastville Workhouse and part of nearby Rosemary Green is an unmarked burial ground (1851-1895) for more than 3,500 residents of that institution. Last summer residents and local historians formed Eastville Workhouse Memorial Group (EWMG) with the aim of placing a permanent memorial on Rosemary Green to remember those who were laid […]
Read More »
Read More »
This website uses cookies for comments, shopping and to gather stats for our geeky pleasure. Read More Accept Reject
Privacy Policy