This year marks the 40th anniversary since the national builders strike in 1972. Five months after the strike had ended 24 pickets who had visited building sites in Shrewsbury were arrested and charged with over 242 offences between them. They included unlawful assembly, affray, intimidation, criminal damage and assault.

Ever since the trial the convicted pickets had maintained that they were the vistims of a policically motivated trial. As Ricky Tomlinson put it from the dock:

“I have heard the judge say that this was not a political trial, and just an ordinary criminal case, and I refute that with every fibre of my being. “

This year the Official Shrewsbury 24 Campaign, on behalf of the five convicted pickets who are still alive and Des Warren’s son, are submitting  the case the Criminal Cases Review Committee in the hope that it will be referred to the Court of Appeal. To find out more go to the new Shrewsbury 24 Campaign website that contains the background to the strike and subsequent trials as well as a recently unearthed film on the Shrewsbury picket’s made in 1974 by Michael Rossen, the former  Children’s Laureate and Radio 4 presenter. 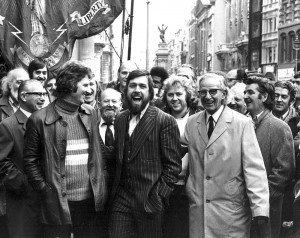