On Narrow Quay by the Arnolfini, Bristol

On Sunday 2nd August 1914, tens of thousands of people demonstrated across the country against Britain’s entry into what became the first World War. In Bristol an anti-war demonstration on the Downs was followed by a mass meeting of Dockers on the Grove to discuss the worrying situation on the Continent. In the preceding week, the dispute between Austria and Serbia had begun to escalate towards a major conflict between the imperial powers; France, Russia, Germany, Austria-Hungary, Britain and the Ottoman Empire. Germany declared war on Russia and by Sunday 2nd August, Britain was on the brink of declaring war on Germany. At the height of the crisis in Bristol, Dockers Union members and their leaders met in public to debate whether to support the drive to war or not.

So come down to Narrow Quay (next to the Arnolfini) to hear the arguments, have your say and raise your hands, Brothers and Sisters, for or against…..

A write up of this event and the sript can be found here. 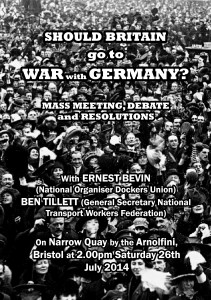 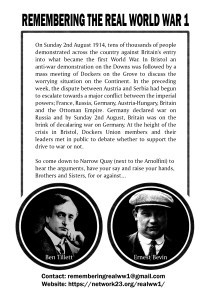