When both levees and governments failed in New Orleans after Hurricane Katrina in 2005, the anarchist-inspired Common Ground Collective was created to fill the void. With the motto of ‘Solidarity Not Charity’, they worked to create power from below; building autonomous projects, programs, and spaces of self-sufficiency like health clinics and neighborhood assemblies, while also supporting communities defending themselves from white militias and police brutality, illegal home demolitions and evictions.

U.S. activist, Scott Crow, a co-founder of Common Ground, is the author of Black Flags and Windmills – in equal parts memoir, history and organizing philosophy – which vividly intertwines his experiences and ideas with Katrina’s reality, illustrating how people can build local grassroots power for collective liberation. It is a story of resisting indifference, rebuilding hope amid collapse and struggling against the grain to create better worlds. 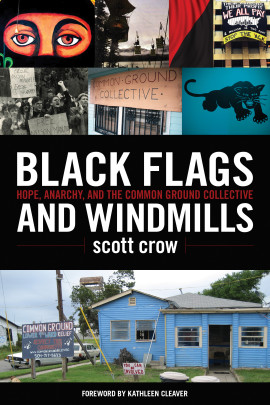