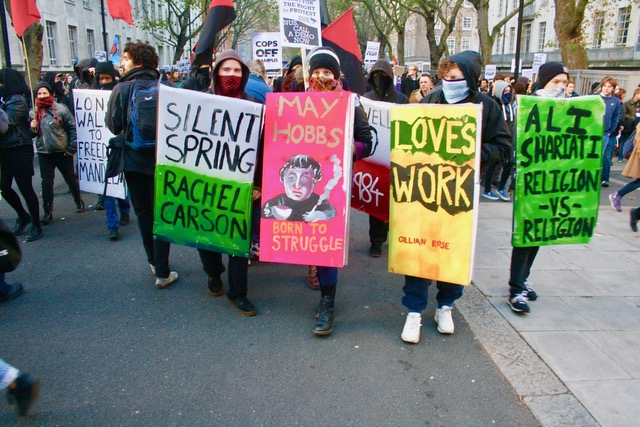 In November 2010 Italian students demonstrating against Berlusconi’s education reforms introduced the concept of the Book Bloc for the first time. There was no irony intended, rather a statement of intent made concrete. It was saying to Berlusconi that if you make cuts that take away our books we will make our own books and turn them into weapons against your police enforcers who will be faced on the streets of Rome with Plato’s Republic, A Thousand Plateaus, Moby Dick, Don Quixote, Petronius’ Satyricon, Luther Blisset’s Q and many more titles that will make you cry out in pain and remorse.

A month later the Book Bloc came to London when demonstrations took place against the spending cuts to further education and an increase in the cap on tuition fees. The students on the demos carried padded shields on which had been reproduced book covers. One of their number explained their use thus:

The writer Jay Griffiths, whose book Pip Pip is a materialist examination of time as it relates to work and social reproduction and was depicted on one of the shields, describes seeing the Book Bloc on a demo:

Radical writing is often described as being at the intellectual barricades but here at the protest metaphor becomes reality. The books were not only at the barricades they were the barricades, behind which the students could both take shelter and push forward; could “transgress” across police lines while the truncheons fell on the books not the demonstrators. The scene embodied something profound – ideas do shield people and those that dislike the status quo can find protection in words of subversion.

The Book Bloc shield contains within itself, as literally word on the street, forceful symbolic power. Capital and its ideological enforcers in the polity go to great lengths to dilute the strength that words of transgression and dissent do display as is shown in the fate of Heinrich Heine’s books. A little over a hundred years after he wrote in 1821:

…his books were dispatched to the flames by the Nazis.

This paranoia is not confined to fascism as is shown by the Eisenhower State Department in 1953, using a list drawn up by Joseph McCarthy at a hearing of the House committee on Un-American activities, ordering its overseas libraries to remove from their shelves material by any controversial persons, communists and fellow travellers. Some of these libraries went on to burn these newly forbidden books. Burning of books was also carried out by the Pinochet dictatorship though the level of cultural and political education amongst the pyromaniacs left something to be desired as they burnt books about Cubism which they thought were about the Cuban revolution. 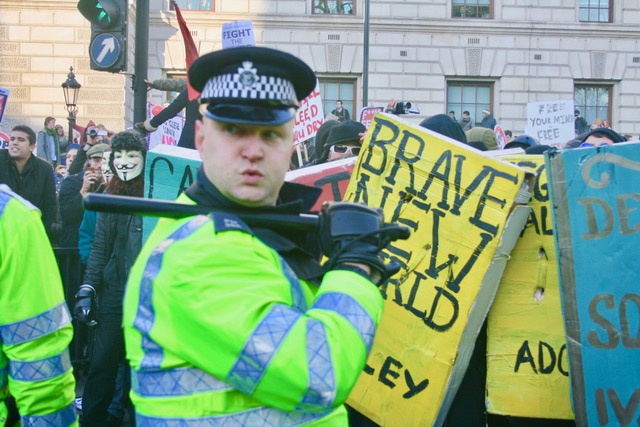 There was further participation by Book Blocs in 2013 at a demo at Sussex University against privatisation and the outsourcing of jobs and again at a student occupation of the University of London but since then their time seems to have passed but this quote might be useful in bringing them out again – it is from a 2006 episode of Dr Who:

You want weapons? We’re in a library, books are the best weapons in the world. This room’s the greatest arsenal we could have – arm yourself!

Photographs taken by the author at a demonstration in London in December 2010.