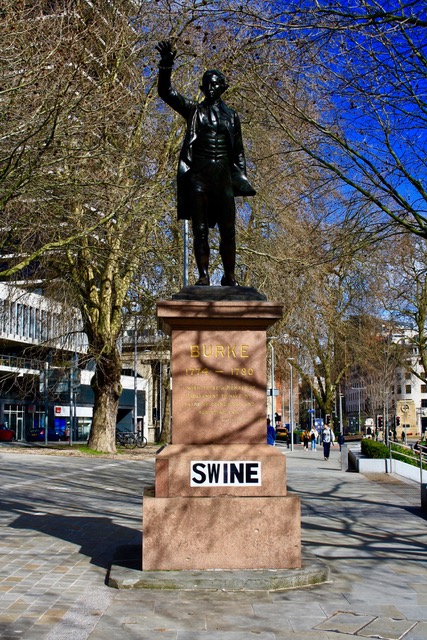 Not far from Queen’s Square stands the statue of Edmund Burke. Had he lived to witness the 1831 Reform Act uprising and a protestor astride the statue of one of his beloved royals all his anti-democratic bile that led him to write his Reflections on the Revolution in France would have been reinforced. It was in that book that he wrote:

Along with the natural protectors and guardians, learning will be cast into the mire and trodden down under the hoofs of a swinish multitude

Now as the Saint-Just Mob have for some time been fully paid up members of said multitude as imagined by Burke, they have decorated his statue in dishonour of a real swine.

Stuart from ‘Ye Radical Stroud Gazette’ has kindly given us the go ahead to reproduce the following entitled Edmund Burke Statue:

Paid for by a Bristol tobacco baron, we look on your works and despair, you stand there commanding the Bristol heights, your ancient regime condescension masked by this deceptive commemoration. I wish to be a member of Parliament to have my share, of doing good and resisting evil.

Far more truthful if on the plinth were etched this memorialisation:

I regard all you common people of Bristol, passing me by on your trivial tasks as nothing more than a swinish multitude