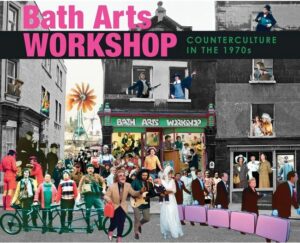 From the late 1960s through the 1970s the counterculture helped to make the West Country fizz with creative ideas and events. One of the most successful ventures, locally and nationally, was the Bath Arts Workshop. As a spin-off from London’s influential Arts Lab, BAT was a loose collective of artists and community activists. To describe it as a community arts group, however, would be to under-explain its work. It was that and much more as it proliferated into festival organisation, media production, hosted national alternative technology events known as Comtek, and challenged homelessness, ecological destruction, racism, and the destruction of historic buildings. Tangent Books have recently published Bath Arts Workshop: Counterculture in the 1970s, on the history of the initiative launched in 1969. This event will be a rare opportunity to hear co-founder Phil Shepherd and other authors Brian Popay, Penny Dale, Victoria Forbes-Adam in conversation, remembering, celebrating, and reflecting upon the Bath Arts Workshop’s relevance for the present day.

A collaboration between Bristol Radical History Group, BAT History Group and Tangent Books at the People’s Republic of Stokes Croft.