Waiting for Brando is a new play written by Mike Morris & Steve Higginson. Its debut is at The Unity Theatre, Liverpool, from Tuesday 22nd to Thursday 24th May.

America 1953 – A country made paranoid by McCarthy’s anti-communist witch-hunts is beginning to march to the sound of civil rights, the birth of rock and roll and the new ‘teenage’ rebel.

Two Liverpool merchant seamen, Eddie and Vinnie – both ‘Cunard Yanks’, meet up in a New York dockside bar to drink away the afternoon before their ship sails for home. But all is not as it seems as past tensions threaten to overwhelm their future plans.

In a studio in New York Legendary director Elia Kazan works on the screenplay for ‘On The Waterfront’, still haunted by his decision to ‘name names’ at Senator McCarthys witch-hunting hearings, with ex-brother in arms, playwright Arthur Miller, perched on his shoulder as the conscience of America.

And looming large over all is the smouldering presence of Marlon Brando, fresh from the critical acclaim of the Wild One and awaiting his entrance as longshoreman Terry Malloy in On The Water Front, in the film that will truly launch him on to the world stage.

Loyalties and friendships are tested in this fast tale of brotherhood and betrayal, secrets and showdowns. And all the time, Brando waits for his moment….

Waiting for Brando is directed by Carl Cockram, a well-known and experienced director, who also stars as Arthur Miller. The other members of an all-star Liverpool cast are Paul Duckworth, Joe Shipman and Michael Ryan. The play is supported by Arts Council England, The Unity Theatre’s Making Art scheme, and features as part of the 2012 Writing on the Wall Festival. 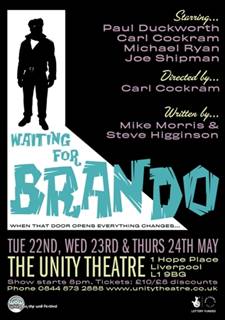