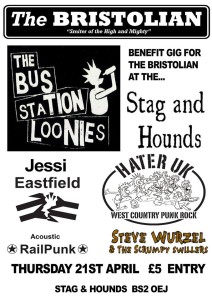 There is a fundraiser for The Bristolian Newspaper at the Stag and Hounds on Old Market Street, Thursday 21st April 2016.
Read More »

The Bristolian local broadsheet is well known in this city for exposing corruption, lies and duplicity amongst Bristol’s ‘high and mighty’ of all shades of political persuasion. What is less well known is that the paper was originally founded by James Acland, a radical agitator, who first wrote, financed and published a daily version in 1827. Its pages contained scathing attacks on the Corporation, Magistracy and wealthy Merchants who made up the oligarchy that controlled the city. Acland […]
Read More »
This website uses cookies for comments, shopping and to gather stats for our geeky pleasure. Read More Accept Reject
Privacy Policy