The Radical History Zone is back at  Hydra Books, 34 Old Market, BS2 0EZ, as part of Bristol Anarchist Bookfair 2016. The main bookfair is once again at The Trinity Centre on Trinity Road.

Bristol Radical History Group will also have a stall at the bookfair stocking our full range of pamphlets. 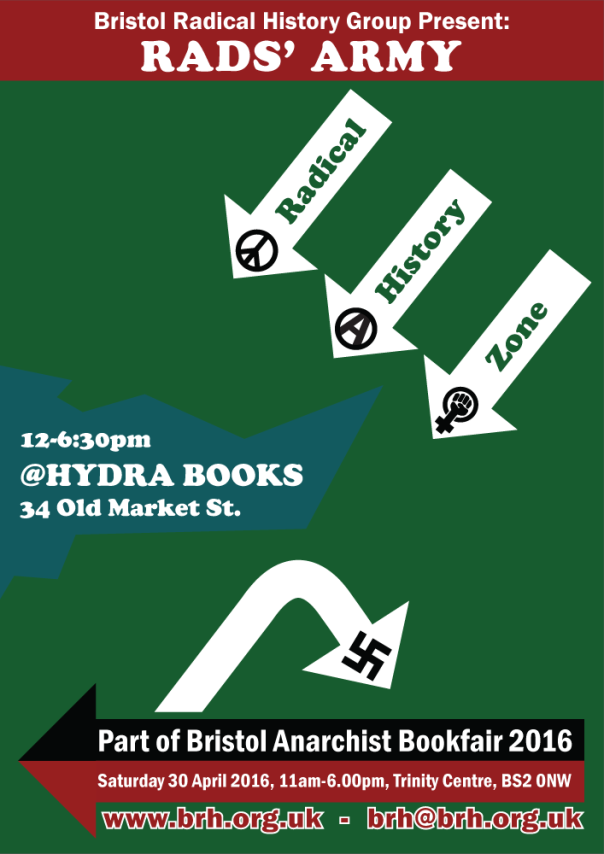 We are celebrating two anniversaries this year! 2016 marks the 10th birthday of the Bristol Radical History Group. This year we have also organised the 5th Radical History Zone (RHZ). The RHZ is an autonomous space for ideas about radical history that takes place alongside the annual Bristol Anarchist Bookfair. As ever there will be an eclectic mix of topics taking a critical approach to hidden history, with perspectives and themes rarely explored in conventional histories or the mainstream media.

Members of the home guard of Bristol Radical History Group will kick off the day with the first two sessions. First up we have Mike Richardson’s launch for his meticulously researched book about the Barton Hill Cotton Factory, The Maltreated and the Malcontents: Working in the Great Western Cotton Factory 1838-1914. Roger Ball and Steve Mills will follow with their lively account of James Acland, the radical agitator who launched the original Bristolian paper in 1827. Then as now The Bristolian is the ‘smiter of the high and mighty’ (They don’t like it up em!). Both of these sessions are perfect examples of the kind of investigative history that can be carried out to reveal and expose forgotten stories from our own city and neighbourhoods.

Since the first Radical History Zone in 2010, we have also prided ourselves on including first-hand accounts of history in the making. Peter Crump appeared at the first event in Stokes Croft to talk about his adventures in the 1970’s eco-anarchist collective Street Farm, which designed the first ecological house, and the heady days of student power at the Architecture Association. Di Parkin shared memories of anarchism in the 1960s in her session entitled ‘Running down Whitehall with a black flag’. Last year Mac McConnell recalled the squatting scene and housing activism in Bristol in the 1970s. This year we are excited to host a discussion with David and Stuart Wise, veteran Situationists from that most underground 1960’s group, King Mob. The conversation could take us from Newcastle to New York and may cover art and anti-art, the Sex Pistols, revolution then and now, ecology and rare butterflies… we’ll have to wait and see! Please do come and join the discussion – permission to speak is not required.

Other sessions in the RHZ have often taken a long view of contentious issues in the present day. This year we are delighted that Molly Conisbee of Bread, Print and Roses will be raising current debates about the railway system and public transport in the context of the 1960’s Beeching Cuts. The legacy of this wholesale axing of the rail infrastructure still impacts upon the everyday lives of millions of people. We are also fortunate to have a visit from Eileen Turnball of the Shrewsbury 24 Campaign. This account of efforts to redress the wrongs of a notorious assault upon striking trade unionists is equally topical in the context of the government’s current Trade Union Bill to curb workers’ organisation. Who do they think they are kidding?

Finally it has also become something of a tradition to include a literary or musical session within the RHZ, such as Pilar Lopez’s musical rendition of the Spanish Revolution, Anna Freeman’s reading from The Fair Fight her novel about women boxers in 18th century Bristol. Don’t panic! – this year is no exception. Ciaran Walsh is going to treat us with a full performance of ‘The Red Dagger’, Heathcote Williams’ epic poem about the 1381 Peasants’ Revolt.

Check the contributors’ section of the Bristol Radical History Group website for video recordings of past talks and events.

As ever our trusty comrades in the Hydra Bookshop will be hosting and catering at this year’s RHZ. The Hydra is a hub of the Old Market community and a treasured space for independent events throughout the year. Support your local radical bookshop and café.

So don’t be stupid boys and girls, come along on 30th April. The Radical History Zone is a free event. The Bristol Radical History Group is independent and takes no funding from government or business sponsorship so donations are always welcome.