A Vision for former Seaman’s Mission and Chapel, Bristol

After the rejection of our plans for Abolition Shed 1, alternative locations were then considered. These had to be within the parameters of our initial vision:

Fulfilling these requirements, these three new locations were then considered: –

The new location options were sent to Cllr Mark Wright (Lib/Dem, Hotwells and Harbourside),  a keen supporter of Abolition Shed 1, and he came down strongly in favour of the third location:

I was very interested to see your possible new locations – in particular I think the Seaman’s Chapel would be a good idea. Over the years as councillor for the area (2005-2016) I tried to get it brought back into use a couple of times by CPO [Compulsory Purchase Order], but there is so little interest in taking it on. But the location by Pero’s bridge and even the name actually fit with the project quite well don’t they. I seem to remember the inside is in a pretty terrible state, but then that’s inevitable with these derelict buildings. I have a vague recollection that the building is currently owned by Sam Smith’s Brewery, as is the derelict eyesore plot next to Arnolfini – they have never had any intention of doing anything with the land, and are uncooperative, but if the Council backed a CPO with cash it could work. Ideally the Council would do both those plots at the same time!

The other plot Cllr Wright mentioned is the patch of derelict waterside land on Narrow Quay, just yards from the Seaman’s Mission, and situated between the Arnolfini and Architecture Centre. The patch of land could become a perfect Garden of Remembrance with more than adequate room for an international Memorial to the Victims of Enslavement – an ideal space for remembrance and reflection.

The Seaman’s Mission is currently on the “At risk” list of Bristol buildings. Pevsner’s Architectural Guide to Bristol had this to say about the buildings way back in 2004:

At the SW angle of No. 46 [Queen Square] is the disused Seamen’s Mission by Voisey & Wills, c.1880, an institute with chapel above. The w front bombed in 1940 and appallingly refronted with the most utilitarian concrete structure, now derelict. It demands imaginative reuse. 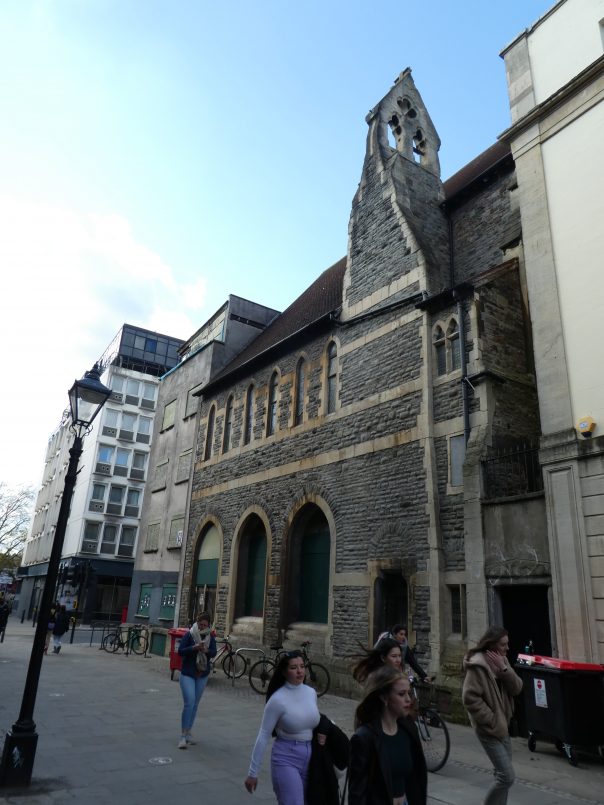 Sam Kendon of Marshall and Kendon Architects, has created a sketch of what the chapel and adjacent refront could look like as an interpretation centre, without any significant demolition: 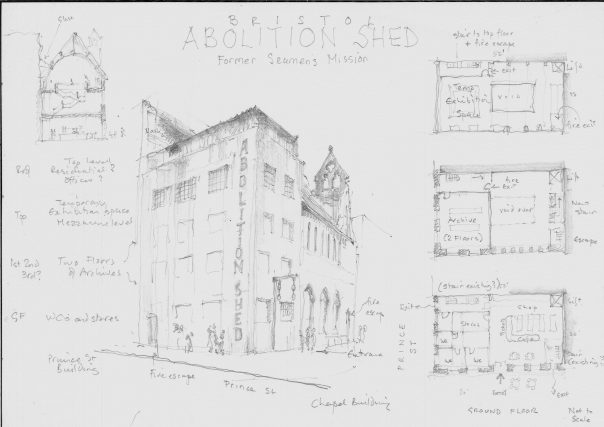 Initially part of the original c.1700 Queen Square development, the area was full of merchant’s houses and warehouses. This portion of the Square was totally destroyed during the Reform Riots of 1831; the site was not rebuilt until the creation of the Seaman’s Mission. Nearby Farr’s Lane, leading to Pero’s Bridge, was named after a slave trader of that name, and the Prince Street Assembly Rooms – scene of many anti-slavery meetings – were just yards away.

As Abolition Shed 1, but unfortunately no longer with the support of Welsh Back Association, the location once again reflects the unique history of the area. The bonus is the potential for a garden of remembrance to house the memorial to the victims of enslavement and even better situated to enhance the ‘String of Pearls’ of visitor attractions along the dockside.

As per Abolition Shed 1

As per Abolition Shed 1

Grant funding applications made by all three community groups inside the Collective.

The Memorial to the Victims of Enslavement should be treated on its own and perhaps made the subject of an international competition to find a suitably sensitive and stunning design.

We need to rely on the knowledge and expertise of Bristol City Councils Museums, Archives and Libraries. Once in place it is proposed that the Abolition Shed project adopts the economic model currently employed by the SS Great Britain.

“The cause of Abolition was the world’s first great Human Rights Campaign.” – Adam Hochschild