Pirates created an upside down world of anarchist organisation and festival, with violence and death ever present. Through the satanic imagery of their flags, skulls, skeletons, grim reapers and hourglasses, they expressed their defiance of death itself. Pirates shunned Christian myths of paradise and proposed a different destination calling their flag the Old Roger, a popular name for the devil, as well as the Jolly Roger. This merry devil united sex and death in a similar manner to the supposed debauched practices of the witches’ covens.

Polly II – A Plan For Revolution

As a result of global warming London’s flooded Docklands have become a haven for pirates. The film imagines a future insurrection coloured by the legacy of dispossessed peasants, political radicals, whores, sailors, pirates, and former slaves whom once inhabited East London and fought a daily battle against their subjection to poverty, displacement and judicial terror.

So will you join compare Randell Brantley for a good rogering and a dance with the devil? Or will you turn and run like hell. 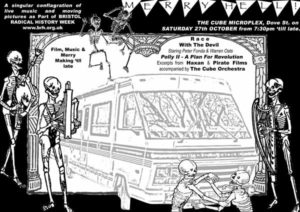