Taken from Bristol Past and Present by J. F. Nicholls and John Taylor, published in 1882 In our ECCLESIASTICAL HISTORY, at 24 and 285, we have already given some description of the rise and sufferings of that section of the church of Christ known originally as the Quakers, but now more frequently called the Friends, who were the first sufferers in Bristol for conscience sake since the days of the Marian persecution. Their first appearance in Bristol was probably in 1652; certainly they were here […]
Read More » 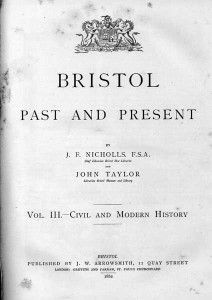 Bristol Past And Present by J. F. Nicholls and John Taylor was published in 1882. While not radical itself, it contains descriptions of many of Bristol's radical moments in way that reflects its era. Below are listed several passages from Volume III. Excerpts on this site: Dorothy Hazard And Other Bristol Separatists James Nayler John The Painter The Bristol Bridge Riots The 1831 Uprising - Part1 : The Reform Bill The 1831 Uprising - Part2 : The Uprising The 1831 Uprising - Part3 : The Aftermath
Read More »
This website uses cookies for comments, shopping and to gather stats for our geeky pleasure. Read More Accept Reject
Privacy Policy