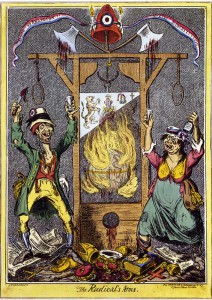 “Those who make peaceful revolution impossible will make violent revolution inevitable.” John F. Kennedy (White House speech, 1962) First published in the Tewkesbury Historical Society "Bulletin 23", Mar 2014 and in "The Local Historian", Jan 2014 (journal of the British Association for Local History) The advent of the French Revolution in 1789 polarised opinion in England. Some saw it as positive: Charles Fox described the storming of the Bastille as “How much the greatest event it is that ever […]
Read More » 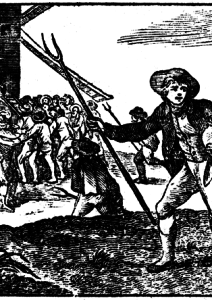 This article was originally published in the Tewkesbury Historical Society Bulletin 22 (2013) Who forgets the frost of ninety-five? Then was all dismal, scarce, and dear, And no poor man could thrive The winter of 1794-95 was severe throughout the land; the rivers Severn and Thames froze over and a temperature of minus 21c. was recorded in London. In Tewkesbury, the freeze began on 20 December 1794 and continued until 7 February 1795. The subsequent thaw caused major flooding of the rivers […]
Read More »

William Morris Moore (1813-1841)
This article was first published in the Tewkesbury Historical Society Bulletin 20 (2011). Having written an article for last year's Bulletin on Chartist activities in the area, I thought it appropriate that a closer study should be made of the chief Tewkesbury Chartist, William Morris Moore. Moore was the son of William and Elizabeth Moore, baptised on 11 July 1813 at Hathern, Leicestershire, a village approximately three miles north-west of Loughborough. The occupation of his father is not […]
Read More » 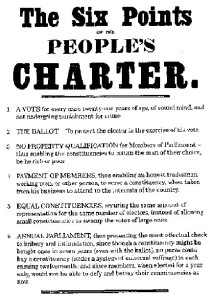 This article was first published in Tewkesbury Historical Society Bulletin 19 (2009) “Last hope, to England turn their anxious eyes, And weary Parliament with ceaseless cries” Ernest Charles Jones (1819-1869) Chartist and poet. Two lines from a long poem The New World written in prison 1848-50, partly in his own blood on pages torn from a prayer-book. The Chartist Movement was at its most active during the decade 1838-1848 and was arguably the first mass working-class political movement that […]
Read More »
This website uses cookies for comments, shopping and to gather stats for our geeky pleasure. Read More Accept Reject
Privacy Policy
Necessary Always Enabled